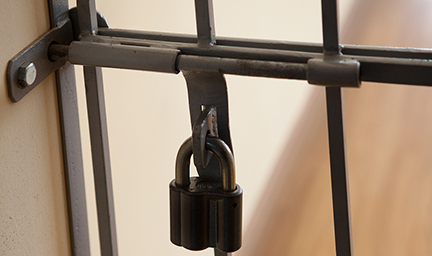 The prudent sees danger and hides himself, but the simple go on and suffer for it (Proverbs 27:12).

Dunbar, West Virginia, September 4, 2019 - Four schools in Dunbar went on lockdown after a man was shot and wounded on a street corner near one of the schools. A church was next to that corner, and a nearby pre-school was already closed for the day.[2]

Antioch, Tennessee, September 24, 2017 - A masked gunman killed a woman in the parking lot and continued firing as he entered a church while members were leaving after the Sunday morning service. Children were in Sunday School at that time, and the teachers barricaded their rooms.[3]

All the Bible verses above are about hiding from danger. The "wicked" in the last verse could be enemy soldiers, robbers, or attackers intent on murder. In The Hiding Place, Corrie Ten Boom tells how her family's home and shop was used to hide Jews from Nazi soldiers seeking to take them to the death camps during World War II.[4]

In some old movies and stories, when an unwanted person was spotted, someone called out, "Katie, bar the door!" Some people use this phrase to mean a threatening situation: "It looks like 'Katie, bar the door!'" If we see an attack coming, it's that time to bar (lock) the door.

Since the Columbine massacre in 1999, there has been an emphasis on lockdowns and lockouts to protect persons not in the immediate vicinity of an active killer during an armed attack. Frequent news stories report schools, businesses, and government offices locking down when a shooter is on the loose in a neighborhood. This is locking whatever place you are in to keep the killer out. It is one of the means of defense to use when an armed attacker hits a church.

Technically, there are lockdowns and lockouts, and there is a reason for that distinction.

Lockout - If the attacker is spotted outside the building or is reported in the area, the Church Security Team may have time to lock the outside doors. A heavily-armed attacker may be able to shoot his way through the doors or windows, but the right doors and windows will delay the killer long enough for people inside to escape out another door, hide, or take up defensive positions.

If an attacker is detected outside, the Church Safety Team does not have time to check all the outside doors. If the church has an access control system with lockout/lockdown, a team member in the foyer or office can push a button and lock all outside doors. An option for this system can also lock all inside doors.

Lockdown - When an attacker is spotted or the attack has begun, a lockdown is called. Those in classrooms, offices, and other rooms will close and lock their doors, barricading them if possible. They will turn off lights and cell phones, move away from windows, and otherwise get down where they cannot be seen. Occupants of locked-down rooms will remain in place until an all-clear is announced or first responders come to the door. If all interior rooms have one master key, the responder or the Safety Team lead can unlock the rooms.

Path of an Attack

The most likely places for an attack to begin are in the parking lot, at the entry doors, or in the foyer. Less likely, but it sometimes happens, is the killer comes in with a weapon concealed and opens fire once he is in a general meeting area, such as the sanctuary or fellowship hall - wherever the most people are. In that case, the weapon is usually a handgun or short shotgun. An attack with larger weapons will usually begin out front or by coming in a side door unless the weapon is carried in something like a guitar case.

Most attackers already know enough about the church to know where to get in, and they may come in another entrance if it is not locked. Thus it is wise to keep all unattended doors locked - Exit Only.

Don't count on everybody knowing what you mean and acting accordingly when a lockdown is called. And don't assume it will be successful. You have to be ready for it. An armed attack is unlikely for any one church, but it is too late to get ready once it begins.

A key question when you lock a door against an attack is, "Will this door hold?" The phrase "Katie, bar the door!" comes from the assassination of King James II of Scotland. A conspirator had removed the lock bar from the king's guest suite in a castle, so the queen's attendant, Kate, barred the door with her arm. The assassins broke her arm while pushing on the door, then came in and killed the king. Her arm was not strong enough to hold them back. The door was sturdy, but not the lock.

Most of our homes and many offices have lauan [LOO′ann] doors on interior rooms. A lauan door is hollow, a frame covered by two thin sheets of wood. There are many people who can put their fist through most lauan doors, so they make a poor choice for security doors. As tempting as it may be, because of the cost and the door's light weight, they should be avoided for classroom and office doors in the church. They would not stop a determined attacker from coming into a classroom, and are no better than paper at stopping bullets. With a lauan door, a sweep with an AR-15 would sweep the room behind the door.

Heavy wood doors, especially oak or walnut, are sturdy enough to resist blows by an attacker. So are many heavy-gauge steel doors. However, the sturdiest door is useless if the frame will not hold. The frame has to be anchored directly to the studs with screws or bolts long enough to hold. Best of all is a steel door frame (also anchored to the studs).

Next is the lock. Will it hold? Can it be locked quickly enough? A double lock, such as many of us have on our front doors, is usually recommended. There is a lock in the door handle that locks the latch. Also on the door is a bolt lock which uses the same key.

A lock bar with well-anchored brackets may be very effective in barring the door, but it takes a little time to grab the bar and put it in place. If the door is locked, it gives you enough time to drop the lock bar into place.

The quickest way to lock down is to use lockdown magnetic strips. This works with steel door frames. Keep the door knob locked. Put the strip over the hole on the strike plate so you can just pull the door open and push it shut. When a lockdown is called, pull the strip off and close the door. It's locked. These are available in the Sheepdog Church Security Store on Amazon.[5]

Have shades on the windows which can be quickly pulled down to block anyone seeing in from outside. This includes interior windows to the corridor. By the way, interior windows should be shatterproof and break-resistant.

We learn best by doing. Written reminders then serve to reinforce what we have learned and practiced. Plan and carry out a lockout/lockdown drill.

Before a drill, show the teachers and group leaders what to do and how to use the lockdown aids in the rooms. Have them practice barricading doors with desks, tables, or whatever is in the room. There is an instructional "Run-Hide-Fight" video produced in cooperation with the Department of Homeland Security.[6] Try to get one (or play it from the Internet) to train them in what to do.

Set the time for the drill. As with a fire drill, let the congregation know when the drill is scheduled. When you start the drill, say it is a drill so people are not alarmed.

For those in the sanctuary or the fellowship hall, have them evacuate in the opposite direction from where the "shooter" is. Have some of them find places to take cover (behind something which will stop or deflect bullets) or concealment (hide themselves).

For the Safety Team, have them find defensive positions from which they can participate in blocking or neutralizing the "attacker."

Communication is the key to coordination, which is a key to successfully protecting the people and ending an active killer incident. The kinds of communication are Team, Leadership, Congregational, and External.

Members of the team communicate with each other using two-way radios, the preferred means of intra-team communication. With ear buds, a team member can hear even if there is noise. Each member can hear what every other member is saying and can visualize the situation. The team leader can direct the others as needed.

They can text each other on mobile devices if there is a wireless Virtual Private Network (VPN) at the church. One advantage of VPN texting is that it is silent, at least when compared to talking. Texting is not drowned out with noise. Also with a VPN, team members may be able to monitor the interior surveillance system (if it is on the VPN) to see where the attacker is. One team member who is monitoring can inform the others by radio so they can concentrate on their response.

If possible, communicate with the church leadership during an active killer incident. This does not have to be constant contact. At least let them know early on what is happening.

Plan how you will inform the congregation that this is a lockdown-or-evacuate incident. The number one option is a public address system set for all rooms in the church. This way, for instance, if someone is in the restroom, they can lock the door (if it is lockable).

This is where having cell phones and/or a two-way radio with an emergency services band is helpful. Call local emergency services, first law enforcement, then EMT or fire & rescue department, then the hospital. If you can, have someone stay on the line with the dispatcher or 911. Be ready for the first responders; arrival.

The other articles in this series are "In the Crosshairs" (Churches as Targets), "On the Wall" (The Watcher's Duty), and "Killer Down" (Neutralizing the Attacker).