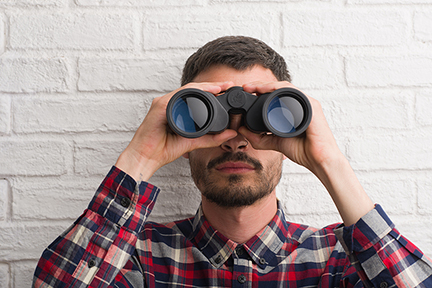 Based on the training module “Active Shooter Response v4” in the Safety Member Certification program.[1]

Now I beseech you, brethren, mark them which cause divisions and offences ... (Romans 16:17).
*Note: Paul said to take note of troublemakers in the church. We should take note of any indication that a person may be a risk of violent action.

And, lo, I perceived that God had not sent him; but that he pronounced this prophecy against me: for Tobiah and Sanballat had hired him (Nehemiah 6:12).
*Note: Nehemiah saw through the deceit of his enemies and discerned the threat (see verse 2).

Then shall ye return, and discern between the righteous and the wicked, between him that serveth God and him that serveth him not (Malachi 3:18). *Note: We need to discern signs of wrong intentions.

Be not forgetful to entertain strangers: for thereby some have entertained angels unawares (Hebrews 13:2).
*Note: Not everyone who comes in is an angel. Some may be troublemakers.

Have you ever heard something like this, "He's all eyes and ears, never misses a thing"? Now that's alertness!

Alertness is the first line of defense. Cities and military posts have been taken because sentries were distracted, or were asleep, or did not recognize a threat in what they saw. The role of situational awareness in the church is recognizing threats and needs. Here are a few examples of what it recognizes:

New Miami, Ohio, February 18, 2021 - Church staff arriving for work on a Thursday morning found a black bag lying in front of the door. Concerned it might be a bomb, they called police. The bomb squad came to check the bag. Hearing a purring sound, they unzipped the bag. Inside was another bag with a mother cat and six newborn kittens. The owner left a note in the bag saying he was unable to care for the cats. Momma Kitty and kits were taken to a shelter for adoption.[2]
* Not every suspicious object turns out like this. It's safer to call the police.

Burr Ridge, Illinois, November 17, 2017 - Parents bringing their children to a church's preschool saw a man waiting there who asked them questions about the school and the church. At least one of the parents called 911 reporting a suspicious person. Responding police were told that the man, who was seeking help, had been told to wait for the church to open.[3]
* Considering the questions the man was asking, it's not surprising the parents became suspicious.

Unknown location, sometime on or before April 23, 2019 - A Quora user asked whether they should "be worried" because a "suspicious looking car" parked for some time in front of their house with someone sitting in it. When the user went to the mailbox, the car moved to the next house and sat there. Various answers were given. One advised on how to approach the driver. Several others said to call the police.[4]
* This was not at a church, but is an example of noticing suspicious activity.

Keene, New Hampshire, May 8, 2011 - On a Sunday morning at a prominent church in Keene, a man carrying a Bible and dressed in all white entered the sanctuary during the service. He walked up to the front, didn't say anything, but stood there listening to the sermon. Parishioners called 911 and reported a suspicious person. When police arrived, the man left peacefully (the author goes to another church and heard the story the next morning on a local radio news broadcast).[5]
* Violating social norms is a suspicious activity.

Nashville, Tennessee, November 7, 2021 - Near the end of a Sunday service, while the pastor was praying with someone on the platform, a man who was not a member got up from his seat in the front, pulled out a handgun, walked up to the pulpit, set down a book, and waved his weapon at the congregation. The pastor tackled the gunman and other members held him down.[6]
* No mention is made of suspicious behavior before the gunman pulled out his weapon, indicating that perhaps no one was watching him until that moment.

Ocala, Florida, November 8, 2015 - The accountant of a church noticed a scarcity of cash in the offerings. He suspected that cash was being taken from offering baskets, and contacted the police.

Detectives set up surveillance cameras focused on taking offerings. In consecutive services an usher was seen taking cash from the baskets while parishioners were praying with eyes closed after the offering had been collected. The next Sunday plainclothes officers were present during the service. They observed the same usher taking cash and stuffing it into his pockets and arrested him.[7]
* Be alert for signs of suspicious activity. Also, have someone watching when others have their eyes closed.

Bowie, Maryland, March 22, 2022 - A lawsuit by a retired AME pastor alleges that bishops and other officers are liable for letting the former head of the denomination's retirement plan be the sole investor of its funds. Risky investments led to the loss of about $100 Million, impoverishing the retirements of AME pastors and staff. Now the denomination, with a new director of Retirement Services, will not let one person make investment decisions alone.[8]
* Accountability depends on others being aware of a person's actions.

Every week, Kris covers the weekly article in a podcast/videocast. He shares his perspective on the article's subject, often adding to the material and/or homing in on a key point. In the comments beneath the videocast is a link to the Show Notes, essentially an article summary. These notes are available for one week (one month in the case of a Lessons Learned from Church Shootings article) from the date of posting. You can subscribe to the Sheepdog Church Security Academy channel on YouTube.

In regard to the subject of this article (All Eyes & Ears), Kris discussed Situational Awareness with Simon Osamoh of the Worship Security Association.[9]

In the news story from Nashville[6], people in the church were caught unawares by a gunman who'd been sitting there until he pulled out his weapon. Fortunately he did not start shooting immediately. This gave the pastor time to see him and tackle him, so no one was shot. Otherwise, there could have been one or more people wounded.

Almost six-and-a-half years earlier, those attending a Bible study at Emanuel AME Church in Charleston[10] were caught unawares, and nine of them were killed.

The news story from Ocala[7] illustrates the fact that being alert to anything suspicious can lead to stopping a thief. The Bowie, MD, story[8] shows the potential cost of not being alert. The denomination was caught unawares by misguided or fraudulent financial dealings. Local churches have been caught unawares by embezzlers.

The Art of Situational Awareness

Each of us is naturally aware of some things. We have unconsciously been conditioned to notice most of them. We have learned others through our activities and education. When we become responsible for the safety and security of others, we must learn how to be effectively aware of any threats to safety and security. Let's consider spherical awareness (the area of our awareness), the colors (levels) of awareness, the awareness process (OODA Loop), and self-drilling (practicing) awareness.

We have been explaining the area of our awareness in terms of angles and directions. Here's a simpler way to describe it: Spherical Awareness. Think of yourself in the middle of a sphere. Be aware of all the parts of that sphere that can be visible to you. Part of it may be cut by a wall - be aware of the area between you and that wall. The same goes for what is above, below, and the rest of the way around.

This is visual awareness. Also exercise audible awareness of whatever sounds you hear. Then add tactile awareness - what you feel, such as the vibrations of footsteps, a floor moving, etc. Actually, try to be aware with all your senses. Do you smell smoke?

Our level of awareness is keyed to the current situation. Lt. Col. John D. "Jeff" Cooper, USMC, a veteran of World War II and the Korean War, said the most important factor in combat survival was the mindset. He assigned colors to four levels of alertness:

The Marines added Black (in a fight).[11] For church safety, or going down the street, we should be at Level Yellow.

These are close to the standard radio codes, but not the same. Don't confuse radio codes with Colors of Alertness. "Code Yellow" means a suspicious person is detected (Level Orange). "Code Orange" is a person who is disruptive of combative (Level Red if they're near us). "Code Red" is fire.[1]

Years ago, Col. John Boyd thought about what makes a fighter pilot successful in air-to-air combat. He described a thought process cycle, the OODA Loop: Observe, Orient, Decide, Act. This has become an essential part of military training and is also being used by many kinds of businesses, government agencies, and institutions.[12] It is an important skill to use in situational awareness to evaluate what we are aware of.

Some things we see, hear, or otherwise sense should catch our attention. What do we look for? This is not a complete list:

If you see something suspicious, do not jump to conclusions too fast. That bulge that looks like a gun in the pocket - what if it's a harmonica and a card holder? Engage the person in friendly conversation as you look and listen. And use the interview stance.

Also, look for safety and fire hazards, the conditions of windows and doors, and signs of attempted forced entry or the preparations for it.

"Be safe. Be aware." More than just a sign on a wall, it should be our normal state as Church Safety Team members - alert for medical emergencies, fire, active killers, and any other threats to the safety and well-being of those in the church.

Church Safety Teams are urged to get all members trained and certified through the Safety Team Member Certification program (a.k.a. Sheepdog Church Security Training Academy). The seven training modules are:

The Church Security Guide has nine articles. These can serve to both preview and review training modules. Two articles relate to topics of this month's weekly articles: "Preparing Your Church for Natural Disasters" and "Church Safety Teams and Active Shooter Training."

The other three April articles are "2015 Emanuel AME Church Shooting" (Lesson Learned), "Man Down" (Knowing What to Do in a Medical Emergency), and "Weathering a Whirlwind" (Tornado Safety).