When Force Is Called For 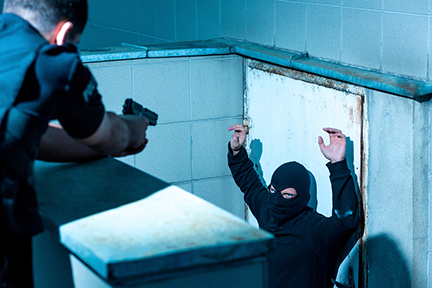 Break the teeth in their mouths, O God; Lord, tear out the fangs of those lions! (Psalm 58:6)

So he made a whip out of cords, and drove all from the temple courts, both sheep and cattle; he scattered the coins of the money changers and overturned their tables (John 2:15).

Arvada and Colorado Springs, December 9, 2007 - A gunman shot four people, killing two, at a missionary training center in Arvada, then shot five more, killing two, in the parking lot of a church in Colorado Springs. After entering the building, he was engaged by a police officer who was a church security team member. He died in the shootout. [2]

Antioch, Tennessee, September 26, 2017 - After killing a member in the parking lot, an attacker entered a church shooting. An usher wrestled him for the gun, stopping the attack, then held the assailant at gunpoint until police arrived.[3]

White Settlement, Texas, December 29, 2019 - A man who had previously been helped by the church with food, but not cash, came in during the Sunday morning service in disguise. During communion, he pulled a shotgun from inside his long coat, He pointed the gun at an usher serving communion, turned and killed a church security team member approaching him, then killed the usher. Another security team member downed the gunman with a shot to the head.[4][5]

The February 2020 series of articles concerns Protecting the Church with Use-of-Force Laws. In this article we consider how certain threats call for force:

Right now, you should know about our download - "Use of Force." Click this link to get it.[6]

Here is an excerpt from the "Use of Force" download:

There are times when the threat we face calls for a forceful answer. In November 2017 in a small church in Texas, just such a threat came, but no one in the church could answer with the needed force. That Sunday morning, 26 people were killed.

Two years and almost two months later, on another Sunday morning in another Texas church, a deadly threat was answered with sufficient force. In six seconds, a gunman who killed two people was stopped by a single shot from an armed Security Team member, saving who-knows-how-many lives.[4]

Since Cain attacked Abel, God's people have always been targets. The immediate motives vary. Some of them are envy & jealousy, resentment over moral and social positions, religious bigotry, robbery, etc. Some are the outbursts of mental illness (including demonic possession) and spillovers of domestic violence.

Attacks on churches in this nation have become more violent over the past two decades as mass killings in general have increased. Obviously, places of worship are not exempt from the dangers faced by society as a whole. For instance, in the same time period, school shootings and marketplace attacks have also become more frequent, not only here but around the globe.

According to a database compiled by USA Today, Northeastern University, and the Associated Press, there were 41 mass killings (four or more killed other than the attacker) in 2019.[7] Carl Chinn has been compiling deadly force attacks in places of worship and religious institutions. The data are not yet in for 2019, but 2017 was the deadliest year in the United States with 118 fatalities.[8]

The question for us is, "Will we be ready if deadly force visits our church?"

The kinds of threats a church may face from people range from very minor disruptions to disastrous situations. Many times a heated conversation naturally ends with the sides cooling down or someone leaving, everyday fleeting brush-ups that blow over or are resolved.

Sometimes, though, a disagreement escalates to an argument, then an altercation. There have been times when one of the aggrieved parties returns with a vengeance, targeting the other person and anyone else who gets in the way. This is when it pays to defuse a situation with verbal de-escalation, giving both parties a chance to cool down.

Then there are those who, for whatever reason, come with the intent to kill, whether a few or many. These deadly threats are the situations we hope to never face, but need to be ready for.

The principle of "eye for eye, tooth for tooth" in the Mosaic Law (Exodus 21:23-25) was in the context of civil suits, limiting retribution to the damage done. For instance, don't take a life to avenge a broken arm or a crushed foot. Don't even threaten an excessive response, such as with, "If he touches that box I'll cut his hand off." Excessive speech conditions us to consider excessive force, and it conditions others to either not take us seriously or to expect it from us and act defensively.

We can apply that same principle to the use of force in defending the flock. Not all force is the same. The best advice is to use proportional force, only what is needed to preserve or restore order. Another article in this series discusses the Use-of-Force Continuum.

Federal and state laws address when and how force is to be used. Find out what the laws are in your area and how they apply to your church.

The news stories cited above show two cases where churches were ready to use necessary force, and one case where someone just happened to be there who could stop an attack.

First note that in each case, the attacker had some previous contact and interaction with the church.

Let's start with Antioch. Burnette Chapel did not have a Safety Team in place. When the shooter, a former member, entered the church firing his handgun, a young man physically confronted him, grabbing the hand with the gun and wrestling the shooter for the weapon. The young man had a weapon, but it was out in his car, so at the moment drawing his gun was not an option. At least he has the presence of mind to do what he could do.

New Life Church in Colorado Springs had a security team. Jeanne Assam, a sworn police officer, was on the team. She heard about the midnight shooting in Arvada, knew the attacker was a former attender at New Life, and suggested preparing for a possible attack. When the attacker came in the door, she was ready.

The shooter at West Freeway Church of Christ came in disguise with a wig and a false beard. The reason for the disguise appears to be avoiding identification - he had previously been helped by the church with food, but was angry at not receiving cash. He was also wearing a long coat concealing a shotgun.

Members of the church security team were made suspicious by his appearance and manner and kept a watch. When he pulled out the shotgun, one team member approached him and another held his gun at the ready. When the attacker fired, killing the first security team member and an usher, the other team member waited for a clear shot, then fired. The team had been trained and regularly practiced their shooting.

In 2017 a Texas law took effect exempting church volunteer safety teams from the licensing requirements for security agencies. Another law, which took effective earlier in 2019, allowed concealed weapons in those churches which did not ban them. This enabled the security team to be legally armed when needed.[9]

Note that in one case, the threat was anticipated based on specific information. In most cases, a church does not receive specific information about a direct threat. However, threat assessment can make church leadership and the Safety Director aware of those who do pose a potential threat to the church, and they can take appropriate measures, including contacting local authorities.

In the latest news story, the security team was alert and kept watch on a suspicious person.

We need to recognize that our church is not exempt from violence on our society. Not only that, for various reasons places of worship are targets of some people and groups. In response, we need to be prepared to use force when necessary and to know how and when to use it.

The three other articles in this series of Use of Force are "How Forceful?" (The Continuum of Force), "Legal Force" (Federal and State laws on the Use of Force), "Managing Force" (Training, Practice, Control).