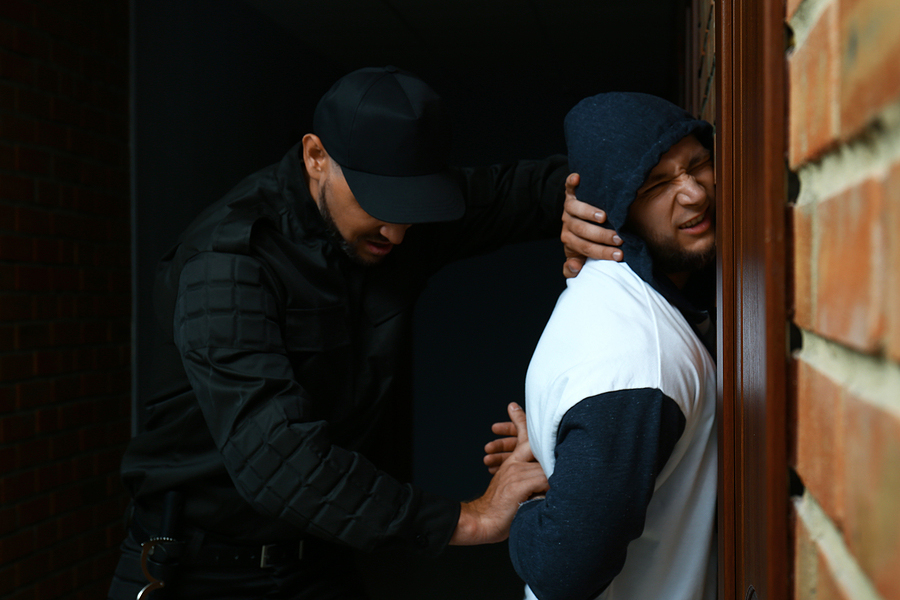 An Article based on the Safety Member Certification training module "Basic Use of Force Laws."[1]

The Bible does not define or specifically name citizen’s arrest, but it does cite a few examples:

Then shall his father and his mother lay hold on him, and bring him out unto the elders of his city, and unto the gate of his place (Deuteronomy 21:19).

And the scribes and Pharisees brought unto him a woman taken in adultery; and when they had set her in the midst, they say unto him, “Master, this woman was taken in adultery, in the very act” (John 8:3-4).

And when her masters saw that the hope of their gains was gone, they caught Paul and Silas, and drew them into the marketplace unto the rulers (Acts 16:19).

Antioch, Tennessee, September 24, 2017 - An active killer shot and killed a member of a church in the parking lot, then went inside shooting. Someone called 911. When police arrived at Burnette Chapel Church of Christ, they found an usher holding the killer at gunpoint.[2]

Tampa, Florida, April 4, 2016 - A TV news crew on the way to a story witnessed another story as they passed a church. They saw a church custodian holding a burglar at gunpoint.

The custodian was repairing damage done to the front door by someone breaking in. Since he had a permit, he took his concealed handgun, not knowing if someone was inside. While the custodian was boarding up the door, the burglar returned. When he came upon the custodian, he turned and ran. The custodian pursued, and caught him in the bushes at the corner. He held the suspect until police arrived and took over.[3]

Laguna Woods, California, May 15, 2022 - When a gunman opened fire at an after-service church dinner, killing one person, church members tackled him, tied him up with extension cords, and waited for the police. No one was charged with false arrest.[4]

Sumrall, Mississippi, June 20, 2022 - A man awakened by barking dogs found someone trying to break into his house. He held the suspect at gunpoint (with his shotgun) until police arrived. They found pistols in his pockets. He had a bloody arm from breaking a window at a nearby church and getting cut on the broken glass.[5]

Kris Moloney expounds on this article - "On Hold" (Citizen's Arrest) - in a videocast on the YouTube channel Sheepdog Church Security Academy. Yes, the name includes "Academy." This is part of Kris's teaching ministry on church safety and security. He draws from his experience, not only in church security, but also in the military and law enforcement.[6]

Beneath the video screen is a link to the Weekly Show Notes. This is a downloadable PDF which can be printed and shared for teaching and discussion. It is available for one week - until the next weekly article is posted.

Detained by a Citizen

The concept of a citizen's arrest is actually an ancient one. For a long time there were no governmental organizations exclusively devoted to enforcing laws among the population. Soldiers and guards might be dispatched to arrest certain persons for violations of the law, but most arrests were made by ordinary citizens who brought offenders to the judges (often the elders of a city).

In the Middle Ages, sheriffs in England were charged with enforcing the laws, and they hired deputies to assist them. However, most of the time they could not respond in a timely manner (telegraphs, telephones, and radios did not exist), so they still relied on citizens who were present to make an arrest, if they could. The deputies could pursue outlaws or post lookouts for them.

With modern communications and transportation, police, deputies, and troopers can often respond soon enough to make an arrest at the scene of a crime - though not always. For the sake of an orderly society, states have defined what is legally acceptable as a citizen's arrest. One aim is to avoid false arrest. Another goal is to reduce the inherent risk to citizens in making an arrest.

More importantly, we do not want someone to make an arrest for personal reasons and bias instead of for the commission of an actual crime. It might be humorously entertaining in a movie or TV show for someone to say, "If you yell at me one more time, I'll arrest you for breaking the peace," but it would not be legal to arrest someone just for yelling at you.

Justification for a Citizen's Arrest

What conditions justify use of a citizen's arrest? Here are the general situations when a citizen can make an arrest:

*A public offense is any violation which can be punished by fines or prison.

Note that a citizen's arrest may not be made for a public offense less than a felony unless it is committed in the arrestor's presence.

An example for #2 or #3 is when law enforcement agencies have issued a wanted post for a specific suspect of a specific crime or crimes. If the suspect may be armed and dangerous, the notice will say so. If they are not likely to be armed, a citizen's arrest may be made.

As to activists threatening to place public officials under citizen's arrest, very few (if any) of these activists have court-admissible evidence to prove a felony has been committed. Therefore, if they actually did make an arrest, they could be charged with false arrest and/or kidnapping, and possibly also charged with assaulting a public official if any force above voice was used.

Scenario: The door to the chambers opened for the judge to come in. The bailiff called, "All rise." When the defendant stood up with his attorney, he turned from the table and bolted up the aisle for the door. The bailiff shouted, "Stop Him!" A woman by the aisle tried to tackle the fugitive as he ran by. A man across the aisle finished bringing him down. The defendant was handcuffed to a deputy for the remainder of the trial.

In this scenario the bailiff ordered an arrest, and two of the spectators in the courtroom obeyed. This illustrates a mandated arrest, when a law enforcement officer requests citizens to capture and hold a person. This is usually when a suspect is fleeing from the officer, but it has happened when a suspect was resisting arrest and the officer called out to bystanders for help.

An order to pursue and arrest may result in forming a posse. Rare today, posse comitatus was used more often in the American West in the late 1800s and early 1900s. Ordinary citizens were called and deputized by the county sheriff or U.S. marshal to pursue known outlaws. Now it is usually limited to nearby persons being ordered to assist a police officer, deputy sheriff, state trooper, or bailiff in apprehending a suspect or keeping him/her from escaping.

Arrest is generally defined as stopping or detaining a person. What level of detainment is considered an arrest depends not only on state laws and local ordinances, but also on court decisions. For example, if you tell a disrupter to sit down while you call the police, and every time he begins to stand you tell him to sit back down, that may or may not be an arrest. If you let him leave, then it would not be an arrest. If, on the other hand, you tied or handcuffed him or locked him into a room, that definitely would be an arrest. If the disruption did not amount to a public offense, this would be a false arrest.

When Citizen's Arrest Is Allowed

In most locations (there are now some exceptions), a store owner/manager or designated employee may stop an observed shoplifter to answer questions and conduct a bag search (a search of the person is usually reserved for police to do). The owner/manager/employee may ask the suspect to remain in place waiting for law enforcement.

If a person is being physically assaulted (battery) or threatened with a deadly weapon, a third person may end the assault and hold the assailant for police.

A person acting in self-defense may hold his or her attacker under arrest. The same goes for catching someone breaking into your home or business.

In all citizen's arrest cases, the suspect must be turned over to law enforcement when they arrive. Until then, the arrestor is responsible for the suspect's safety. No mistreatment or excessive or unnecessary force is allowed. Investigation is the prerogative of the police. Cooperate with them and answer their questions.

There can be physical and legal consequences of a citizen's arrest.

The first peril is physical injury. This may be to the arrestor, bystanders, victims, or the suspect. Armed or unarmed, the suspect may fight back while resisting arrest. He/she could injure the arrestor or the victim. If the arrest is to defend someone already in danger of physical injury, then it is worth the risk. If using a firearm or other lethal projectile weapon, there is a risk to bystanders. Jack Wilson at West Freeway Church of Christ waited until he had a clear shot to fire his gun at the assailant.[8]

The second peril is legal liability, both criminal and civil.

If the citizen's arrest is legally valid, how the suspect is treated can be fodder for criminal charges or a lawsuit. Will the suspect claim excessive force was used? Were restraints too tight? These charges, often lodged against police, can also be used against citizen arrestors.

The validity of the citizen's arrest may be in question. If the suspect is not charged with a crime or is acquitted, the detainment can be considered a false arrest. This is why it is important to be certain that a crime was committed before making an arrest. In the hypothetical case given above of dealing with a disruptor, letting him or her leave if he or she chooses to go avoids a false arrest.

A person making an unnecessary detainment can be charged with making a false arrest, even kidnapping. If the arrestor is found guilty, then the door is open for the suspect to sue. When it comes to church safety and security, the church can also be sued. If the team member has been found guilty, this may remove liability insurance coverage for that case (consult your policy).

Citizen's arrest is covered under "Basic Use of Force Laws," a training module in the Safety Member Certification program. Church safety ministries are encouraged to have all their Safety Team members trained and certified through this program. Each one completing every lesson and passing its certification test will be certified for two years as a Safety Member.

The 2022-2023 Online Events school year began on September 11. The next class, on Sept. 25, is Deescalating "Disruptive Persons." "Basic Use of Force Laws" (highlighted) is on October 9.

All classes are on Sundays at 3:00 pm Central Time.

Think twice before making a citizen's arrest. Do not attempt it unless it is both legal and necessary.

This is the third weekly article for September. The other three are "2019 West Freeway Church of Christ Shooting" (Lesson Learned), "Outer Guard" (Stopping a Killer Outside), and "Setting Boundaries" (Protecting Children with Preventive Procedures).

All classes are on Sundays at 3:00 pm Central Time.