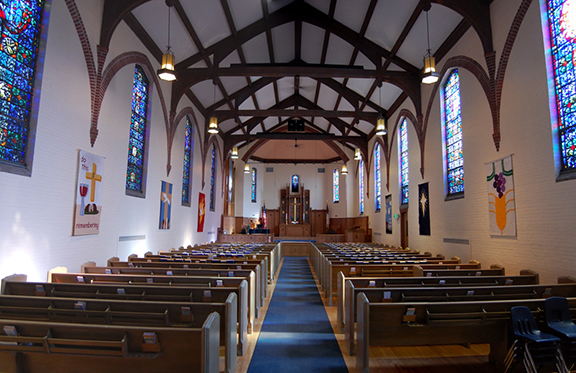 An article in the series “Responding to Active Shooters” based on the Sheepdog Church Security training course Active Shooter Response v4.[1]

Whether by chance or by design, a church can become part of the scene during a neighborhood shooting incident, even when there is no church activity at the time. The church in this account was used to stage a shooting incident late at night.

Learn more about Safety Member Certification in this video.

A Safety Team member can complete the Safety Member Certification alone, but there are savings for three or more members participating in the program at the same time. Sheepdog Church Security has group coupons for three, five, or ten persons at a lower per-person price than for a sole participant.[2]

The training course related to this article and the ones preceding and following is Active Shooter Response v4.[3] It is included in the Complete Training Program in Safety Member Certification described above. To help your church prepare for an active shooter event (which we hope never happens in your church), we have a downloadable resource, the Active Shooter Situation Checklist.[4]

Mental Illness as a Cause

Mental illness is one of the two leading causes of active shooting incidents in places of worship. The shooter in this incident had mental health issues. A year-and-a-half before, he was convicted of felony strangulation. Psychiatric evaluation disclosed mental illness, and his sentence was 90 days followed by probation conditioned on psychiatric care (medication and counseling). A week before the shooting incident, he was summoned to court because he had stopped going to counseling. A search of his home after the shooting confirmed that he had stopped taking his medications.

The summons was triggered when the suspect was taken to the hospital for a drug overdose presumed to be a suicide attempt. It likely was so, but he told the doctor that if he did commit suicide, he'd take people with him. This was a week before the shooting.[15]

According to his employer, a cleaning service, his mental condition did not interfere with his job as a cleaning supervisor. Among the clients in Moscow, Idaho was the First Presbyterian Church. He filled in when needed. Keys were not needed for the church, since the sexton (caretaker) lived in the church and could let them in. Therefore, we don't know whether the shooter had access to the keys. In either case, it had been months since he'd been there. However, he was familiar with the layout of the building.

The shooter's wife was a custodian in the Latah County Courthouse, which was across Fifth Street from the church. On the day of the shooting (Saturday, May 19), he met with a co-worker in a downtown bar for drinks then went home. That evening, he shot and killed his wife before going into town to shoot and kill others.

According to the Idaho State Police investigative report (released almost a year later), about 10:30 PM, the shooter "broke into" the First Presbyterian Church (on the north side) and went through to a door facing the courthouse (on the south side).[16] This placement of the shooter was confirmed by deputies' observations and the locations of shell casings and the killer's vehicle.

The report does not say how he broke in, but the choice of terms may rule out using a key from where he worked. If he had a key to the church on his person, it was not noted in a news story based on the ISP report. In any case, he did it quietly enough to not awaken the sexton and be discovered before setting up his sniper's nest. I don't know where the sexton's apartment was, but it may have been in a back corner of the church, away from commonly-used entrances, which could explain why the entry did not arouse him.

At the door on Fifth Street, the shooter went out far enough to see the windows of the county dispatch center just down the street and still have cover. He had a Springfield M1A and an AK-47. About 11:22 PM he fired several rounds through the windows. The dispatchers moved to another part of the building, next to the jail, a few with minor injuries from broken glass. The call went out to all law enforcement agencies that the courthouse was under fire. City police and sheriff's deputies responded, as the shooter apparently expected. The ambush was set.

First on the scene was a city police car. As the two officers inside parked their cruiser and crossed Adams Street with guns drawn, about ¾ of a block downhill from the shooter, one was wounded fatally, and the other was wounded while pulling him to cover. Some of the rounds penetrated their body armor.

Then deputies arrived and saw that gunfire was coming from church property. They managed to take away the two fallen police officers, but a deputy was severely wounded.

Another person severely wounded was a University of Idaho student who lived six blocks away. He heard gunfire, picked up his .45 revolver, and headed for the courthouse to confront the shooter.

Deputies using moving vehicles for cover charged toward the shooter's position. He retreated into the church, closing the door behind him. Meanwhile, the sexton was awakened by the sounds of shooting. He went to the office and called 911. The shooter saw him in the office as he was on the phone and shot him through the open door, killing him. The killer then went into the sanctuary and sat in a pew with the rifle between his knees. He managed to shoot himself in the head not long after 1:00 AM.

The county SWAT team entered the church about 6:30 and found the bodies of the gunman and the sexton. Later that day, armed with a search warrant, deputies went to his house. There they found the body of his wife. Also found were several unused psychiatric medications.

Sunday morning, First Presbyterian Church of Moscow, Idaho, including the sanctuary, was a crime scene. Church members met, instead, in a building on the University of Idaho campus. In 2017, on the tenth anniversary of the shooting, a memorial service was held in the sanctuary. Speakers included the wounded deputy and police officer.

The slain officer, Sgt. Lee Newbill, was the first member of Moscow's police force to be killed in the line of duty. There is a memorial to him.

Ten years after the shooting, the local newspaper said that since then the county has set up a mental health court. This is specifically to deal with crimes resulting from mental illness (which was called "criminal insanity" generations earlier).[14] Presumably, this would ensure closer monitoring of psychiatric probationers and parolees.

There are no publicly available accounts of security measures at the First Presbyterian Church of Moscow, Idaho (FPC Moscow). However, within the Presbyterian Church (USA) there is growing awareness of security issues. Two years ago, Presbyterian Mission, a denominational publication, asked the question, "How safe is your church?" This article told of how congregations try to balance security and a welcoming spirit.[17]

It is understandable if the congregation in Moscow chose to not let security measures become publicly known for security reasons, especially since the church's space was violated late at night when doors were locked anyway. Don't give would-be burglars the key of knowledge.

Seeing that in this case, the shooter broke in late at night, the lesson learned is, "Enhance access control."

The purpose of gates and doors is to keep trouble out. This is called "passive access control." When a door is locked, a key is (usually) needed to open it, even if no one is there. However, some intruders know how to pick most locks. Some are adept at decoding combination locks. Jesus referred to "thieves" that "break through" and "steal" (Matthew 6:20). Many times they do not bother with the locks, but literally break through roofs, walls and doors, ceilings and floors.

Enhancing closures means installing better locks and stronger walls, windows, and doors. The best lock is only as strong as the door it's on, which is no stronger than the door casing and the wall.

Keep a log of who has key and keep it up-to-date. Insist on the return of keys from anyone no longer authorized for their use. Periodically change locks, therefore the keys of authorized users. However, it's too easy for a key to get into the wrong hands. A better idea is smart locks.

Better locks are smart electronic locking systems. An electronic pass key is coded for the intended user. The code may be for only certain doors, be for a limited time (such as one-day use), be on an allowed-use schedule (no getting in after hours), and revoked when the user is no longer entitled to access. For instance, a janitor's passcode can be scheduled for expected cleaning times. This was not available in 2007 for the First Presbyterian Church of Moscow, but if the church had it, a cleaning service employee could not have used it at 10:30 PM.

Another advantage of a building-wide electronic lock system is the ability to lock or unlock all doors at once in an emergency.

If someone does break in, how can they be stopped?

The purpose of alarms and surveillance cameras in a church is to know in real time when danger is present, especially when no one or very few members are present. Window and door alarms can be armed and disarmed at a central panel and/or a panel just inside a door (disarm it within seconds of unlocking the door and coming in). They can send an alert to local law enforcement, the Church Safety Director, and one or more Safety Team members. Now they can be armed and disarmed remotely.

Surveillance cameras are a lot more advanced than they used to be. They no longer have to record images on film, tape, or a card. Today's cameras can send their images and sounds to a monitor and recorder either in the building or off-site. They can also be monitored on a mobile phone. So if the Safety Director receives an alert, he or she can see what triggered the alert and, if needed, call 911.

If these kinds of alarms and surveillance had been available in 2007 at FPC Moscow, the sexton could have been awakened while the shooter was still breaking in and could have alerted 911 before the shooter took aim at the dispatch center's windows – and without leaving his apartment. Of course, we are looking back in time to when these enhancements were not generally available.

Finally, train staff in responding to alarms and intruders.

A shooter may try to enter a church building while it is locked up and no one is at any door. Maybe they are already shooting, or they're coming after someone inside, or to use the church as a platform for shooting. Here's where enhanced access control is needed.

There are four articles in September. The other three are "The Nudge" (Sparking Interest), "Time to Gel" (Get Organized and Rolling), and "Bar the Door" (Lockouts and Lockdowns).

News and Other Sources