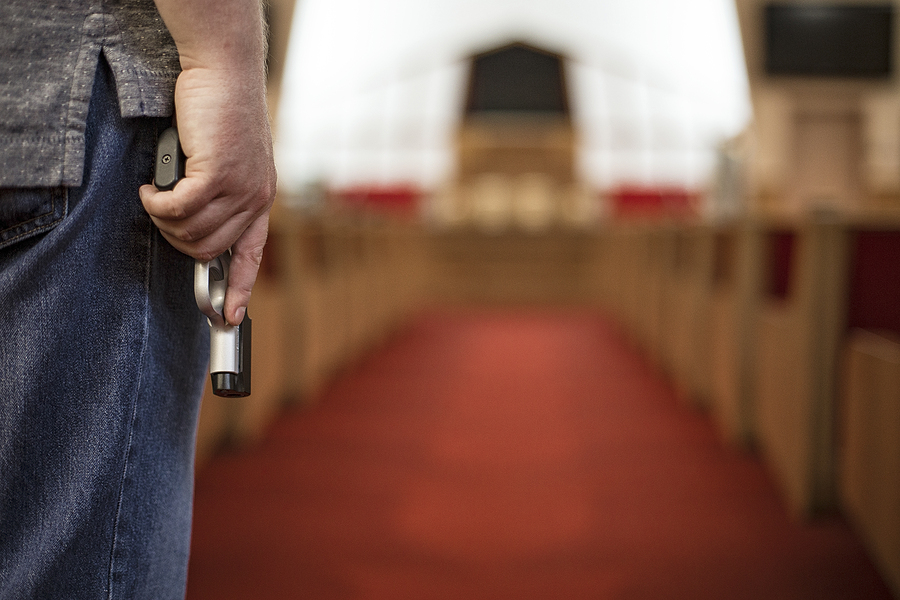 Then Achish said to his servants, “Behold, you see the man is mad. Why then have you brought him to me? Do I lack madmen, that you have brought this fellow to behave as a madman in my presence? Shall this fellow come into my house?” (1 Samuel 21:14-15)

Like a madman who throws firebrands, arrows, and death (Proverbs 26:18).

And when Jesus had stepped out of the boat, immediately there met him out of the tombs a man with an unclean spirit. He lived among the tombs. And no one could bind him anymore, not even with a chain (Mark 5:2-3).

What do you do when the totally unexpected happens? You follow “just in case” procedures. The car behind you doesn’t stop in time, and the “kissing bumpers” leave more than smeared lipstick. You get the vehicle registration out of the glove box (for the expected police report), fish the insurance card out of your wallet, take a deep breath to compose yourself, and step out of the car to exchange info with the other driver and look at the damage. You didn’t expect the accident, but knew what to do just in case.

What if someone comes into your church, does or says something odd, then goes totally off the wall? It’s not what you expect for any day or hour, especially at the time it does occur, but you need to know what to do just in case it does. Such was the case at the World Changers Church in July 2005.

The featured Sheepdog Church Security training course for this month is Basic Use of Force Laws v4.[2] Here is a video clip from the online version of that course.[3] Additional training videos with the insights of two dozen experts is available through the SDCS affiliation with the Worship Security Association.[4]

Sometimes a person's behavior is inexplicable, especially when it seems out-of-character. If an investigation at the time has not uncovered the cause, then it may never be known for certain as evidence is lost. Such was the case in the summer of 2005 in College Park, Georgia.

About 9 pm on Saturday, July 30, 2005, a man dressed in a suit, but without a shirt, entered the lobby of the World Changers Church in College Park, Georgia, while custodians were sweeping and mopping floors. He went to the door of the sanctuary and knocked. A security guard came, and the man asked to be let in. He said he was getting married the next morning at the church and asked to use the phone. While dialing he said things like, "They're after me to get the codes," and, "I'm getting married tomorrow."

Before the guards could unlock the door, the man ran past them through the lobby and down a hall to a back entrance. From there he went into the backstage area. He hid from the guards and was ranting, "I got the Bible codes." Since he was uncontrollable, the guards (who were unarmed) called 911. They reported that the man was aggressive and refused to leave the premises.

A Fulton County police officer responded. The officer attempted to get the man to calm down, but he wouldn't. He kept hiding and moved to a hallway behind the pulpit. Then he charged the officer, who fended him off with a baton. The officer reached for his gun, and the man charged again. This time he tried to grab the gun. The officer shot the man, fatally wounding him.

Background to a Tragedy

The guards on duty did not know that the visitor was a former security guard for the church. He was also a big fan of the Pastor, Creflo Dollar. A seven-year U.S. Air Force veteran, he had served in Iraq. After his discharge, he lived in Atlanta with his wife and son and worked for the church for eight months before getting a job with a local cable company. Then he was recalled to full-time active duty with the Georgia Air National Guard.

The day of the incident, the strange visitor and his wife were preparing to move to a new apartment. Driving separate cars, they agreed to meet at a restaurant, but he was a no-show. She called, but he didn't answer his phone. She went to the apartment and noticed his Sunday suit was missing. Even stranger, the man called a close cousin and asked her to meet him in the morning at the church. Putting this together with what he said at the church makes it appear that he was delusional.

Why the Bizarre behavior?

We did not find a record of what he went through in Iraq. He was a Staff Sergeant, so in Iraq he had ground duty. We do know that his start on civilian life was interrupted by returning to active duty. That would affect not only him, but also his family.

There's too much that we do not know about motives. What we do know is what he did and the tragic response.

Despite all that we do not know about the off-the-wall visitor to the church who got himself shot the night of July 30, 2005, there is one lesson we can learn. When there is violence or an uncontrollable person on the verge of violence, call 911. The security guards at the World Changers Church in 2005 were unarmed. However, even if you have armed Church Safety Team members, call 911 when the situation involves violence. On-duty law enforcement officers are the ones authorized to make arrests and conduct investigations. If they are there to take control before anyone is hurt, they assume liability the church would otherwise have.

Suspicious behavior is not always as obvious and blatant as it was in this incident. Among the videos available through the Worship Security Association[4] is a four-part series on Responding to Suspicious Activity.

We never know when trouble will come knocking on our door. Know what to do just in case. Don't hesitate to call 911 when violence is involved or imminent.

The other three articles for this month are "An Abundance of Counselors" (Worship Security Association), "On the Radar" (Situational Awareness), and "The Third Level" (Empty-Handed Control).