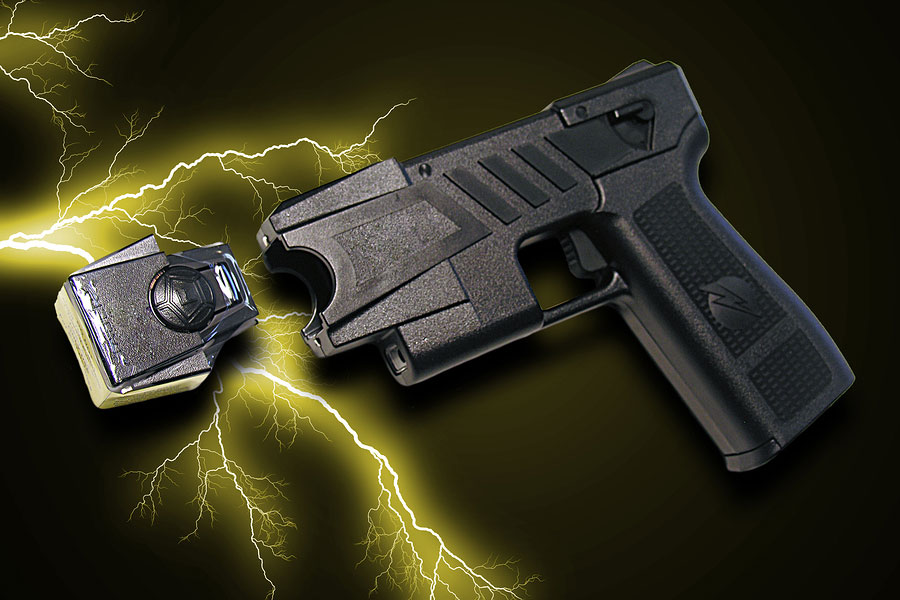 When he commits iniquity, I will discipline him with the rod of men (2 Samuel 7:14).

Whoever sows injustice will reap calamity, and the rod of his fury will fail (Proverbs 22:8).

And making a whip of cords, he drove them all out of the temple, with the sheep and oxen (John 2:15).

Sour Sally at the Door

Marcy stood at the door to Rockport Community Church, greeting people as they came in. Salina Brown - nicknamed "Sour Sally" - came in. Marcy handed her a bulletin, cheerfully saying, "Good morning, Sally. How are you?"

"That's all I need, a busybody at the door!"

Marcy chose to safely ignore the remark - better not make a bad situation worse. However, Sally was not through.

"Here! Take your piece of trash back!" Sally did more than just hand the bulletin back; she shoved Macy so hard she started falling.

Tom Collins, hearing the retort, turned and caught Marcy. But that wasn't enough for Sour Sally. She cocked her arm for a swing. Just then, Marcy pulled what looked like a lipstick tube out of her pocket, holding her thumb on top. She aimed, pressed the top of the tube, and sprayed a liquid on Sally's face. Sally backed off, choking, covering her face.

We have seen tragic stories in the news where a situation rapidly exploded, and a defender responded with lethal force, killing or severely wounding an unarmed assailant. While we may need a concealed firearm for defense against deadly force, we do need to know how to defend against non-lethal force. We may be able to defend ourselves totally unarmed, but there may be a case when a less-than-lethal weapon is needed.

In the story above, we don't know why Sally was ready to explode that morning, but she did. Marcy did not have self-defense training - she was not on the Safety Team - but she did have pepper spray, and knew how to use it. Even if we do have self-defense training, we may at some time need a non-lethal weapon to bring a violent disrupter under control.

When the subject is weapons, it is only natural for most of us to think of lethal and potentially lethal devices, such as firearms, edged weapons, spears, archery, and motor vehicles. However, there is a continuum of lethality in weapons.

A weapon is anything other than your own body parts used to exert offensive or defensive force. A 12" wood or plastic ruler can be used as a weapon, though a slap by a ruler is not very effective except on very small persons. A rock can be picked up and thrown at an intruder or assailant, and can be effective if hurled with enough force and accuracy - it may buy enough time to duck for cover or escape. A table overturned may or may not be a weapon, depending on whether it hit a pursuer, but it would hinder the pursuit.

There are several items generally considered non-lethal defensive weapons. These are categorized by how they work: tripping-entangling-restraining, spray, impact, and electroshock. Since these are intended to be less-than-lethal, they could be just called devices, but they do inflict some degree of injury, pain, or discomfort, so they are weapons.

Some early weapons capture game or an opponent by tripping, entangling the legs, or restraining. For instance, the bola, cords with weights at the ends, has been used by Native Peoples from South America to the Arctic since well before the arrival of Europeans. Similar weapons have been used on other continents. The user throws the bola at the animal or person to be captured.[1] The momentum of the weights carries the cords around the legs (or the wings of a flying bird), entangling them. As fascinating as a bola may be, it is not the best choice for a church safety team.

A restraining weapon used in the American West was the lariat. It was usually used to lasso cattle or horses, bringing them under control. On a few occasions it was used to capture a fugitive. Interestingly, lariats were used in ancient Egypt.[2] Frankly, I can't see a lariat being used in a church setting.

Tripping sticks have been used to stop offenders. This is not a item for sale, but any stick at hand can be used in a pinch, such as for stopping an assailant running from the scene or chasing a victim. Closely related are trip wires used to impede an intruder or escapee. For church security, using what's at hand (such as a broomstick, cane, or umbrella) to trip a violent individual is a viable option.

These are among the best-known non-lethal weapons, and are readily available. The active ingredient in the pepper spray is oleoresin capsicum, the HOT in hot peppers, abbreviated as OC. Kris Maloney, founder of Sheepdog Church Security, lists five reactions to OC spray: excessive tears, burning pain, swelling of the eyelids, difficulty breathing, and temporary blindness. Pepper spray can be delivered as a mist, a stream, or foam. The stream is generally more accurate, as in the Sabre 3-in-1 Pepper Spray, available on the Sheepdog Church Security Store on Amazon.

New York, Massachusetts, Michigan, California, Wisconsin, and the District of Columbia have restrictions on pepper spray, while no other states do.[3] However, some counties, cities, and townships do, so check your state and local laws before purchasing pepper spray for defense.

Not as common is tear gas. This is usually restricted to law enforcement and corrections officers.

Batons (nightsticks) are the modern equivalent of rods and staffs used in Bible times for defense and discipline (see some of the verses above). The classic design of a police baton was developed in the 19th Century. Modern batons include telescoping models (pictured) and ones with side handles. The advantage of a baton is that it can deliver a sharp, painful blow to a violent person. It can also be used as a prod, as a guide for giving directions (a silent "this way"), and to parry blows.

Laws concerning batons vary by state. In some, it is illegal for all persons except law enforcement officers and correctional personnel. Other states have certain restrictions, some have none, and for a few the law is somewhat vague. The link below has a chart of the laws by state.[4]

Kubotans have descended from the small bamboo defensive weapon invented about 50 years ago by Sōke Takayuki Kubota.[5] It is a keychain weapon, small enough to fit within a hand with the ends sticking out. One end holds a key ring, and the other end may be flat, round, or pointed. Held in a fist, it supports the knuckles while adding a little weight. The end opposite the key ring can be used to press on pressure points. The laws are mixed for kubotans internationally. In this country, there are not many restrictions, but they are banned for carrying on a plane.

The monkey's fist is a specially tied knot at the end of a rope. First used as a weight for throwing a line from one ship to another, it became used for a weapon. This has been especially so when a metal weight is in the center of the knot. It can be swung at an attacker, wrapping the line around a limb or hitting the body.

A small monkey's fist is commonly made into a key fob with a 6" line. Also called a slungshot, it has been banned in several states and local jurisdictions, because it was used by gangs, though with a longer cord and heavier weight than that on a keychain.

Electroshock weapons include stun guns and tasers. The stun gun is a melee weapon (direct contact), while the taser is a range weapon (extends beyond hand-held reach). They work by contacting the subject with two electrodes. A high voltage, low amperage current then passes through the part of the body between the electrodes. This has a disruptive effect on the nervous system, causing immediate temporary loss of muscle control, often leading to the subject falling.

The user of a stun gun presses the electrodes against the assailant. Some stun guns automatically discharge on contact, some wait for a trigger. Some brands are advertised as shocking a person who tries to grab the device to take it away from the user.

On the other hand, a taser fires two electrode darts on long, flexible wires at the subject. These penetrate clothing and make contact, discharging the current. The chief advantage of the taser is that it extends the user's reach well beyond arm's length. The disadvantage is that electrodes and wires have to be replaced.

Both tasers and stun guns can rebuild their charges as long as the batteries are charged.

Stun guns and tasers have some regulations or specifications (such as added for use during a crime) in most states, and are specifically restricted in a number of cities. Canada is among the countries where they are restricted. A chart of these can be found at the link below. [6]

Several products for use during lockdowns have been added to the Sheepdog Security Store on Amazon[7] which were not listed in the article "Buckled Up for Safety." They are listed below under Resources.

Images #1 and #2 are from cited Wikipedia articles. All others are from Amazon listings.