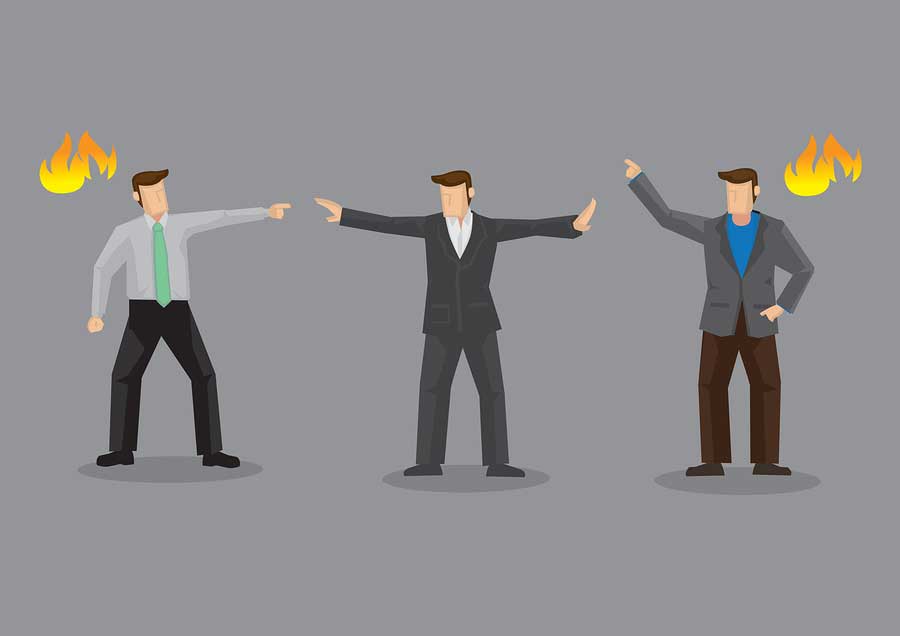 The Lord God has given me the tongue of those who are taught, that I may know how to sustain with a word him who is weary (Isaiah 50:4a).

A word fitly spoken is like apples of gold in a setting of silver (Proverbs 25:11).

There is one whose rash words are like sword thrusts, but the tongue of the wise brings healing (Proverbs 12:18).

A soft answer turns away wrath, but a harsh word stirs up anger (Proverbs 15:1).

Thailand, June 30, 2017 - A distraught man who hadn't been paid for work he'd done entered a police station holding a knife to his throat and threatening to kill himself. The senior police sergeant talked to him, calming him down. The man handed his knife to the officer, who ended up giving him a hug. [2]

Durham, Maine, August 30, 2018 - People in a neighborhood reported hearing gunfire. Police rushed to the neighborhood and surrounded the house where shots were fired. After negotiations with officers, the shooter, who had threatened to harm himself, gave up peacefully. [3]

Baltimore County, Maryland, November 10, 2018 - The family of a "person in crisis" called police to check on him. Twelve hours later they spotted him driving, got him to pull over, and peacefully took him into protective custody. [4]

Maywood, Illinois, February 6, 2019 - A 33-year-old autistic man had a reaction to medications, which sent him into a rampage instead of calming him. A hospital security officer at Loyala University Medical Center whose son has autism had training in how to deal with autistic patients. He and fellow officers were able to calm the man down when they found out his interest in Mary Poppins. [5]

Virginia Beach, Virginia, February 24, 2019 - When an adult man at home alone threatened self harm, police were called. They barricaded neighborhood streets and began talking with the man. About three hours later, the situation came to a peaceful end. This was the second "person-in-crisis" incident that day in Virginia Beach. [6]

Time to Step in

You are in the foyer Sunday morning. In a few minutes the second service will begin. A couple in the church has recently separated - she came in a bit ago and took their toddler to the childcare area. Another family is dealing with a mentally ill daughter. You were also briefed that threats were made last week against another church in town. Your awareness level is Yellow.

A man comes in who looks upset and nervous. It's the husband whose wife came in not long ago. He looks around, then heads for the childcare area. You begin to follow, just to keep an eye on things.

The wife's voice comes from the hallway, "What are you doing here?"

"The paper's say you're to leave us alone!"

You call on the radio, "Code Orange, hallway to childcare," then head into the corridor. It's time to step in.

When stepping into a situation, we are aiming to defuse escalating tensions before they become disruptive. The proven means for doing this is verbal de-escalation. The situation may be a continuance of domestic conflict, or mental illness, or an ongoing personal dispute. It could be a disagreement in a conversation becoming an argument. Real-life experiences show that words can be used to cool down heated exchanges. A paraphrase of what Solomon said is, "A calm answer cools anger."

Essentially, we initiate verbal de-escalation by engaging in conversation. In the conversation, get the subject to talk. Use the conversation to bring calmness. Remember the goal of not letting the situation become a disruption. Let's put a little more detail into this.

The first point is, "Don't sneak up on the subject." When a person is tense, it is not wise to startle them. If you can, approach them where they can see you. If they can't see you make sounds or speak so they know you are there.

In our scenario, the husband's back is to you. Since this is a hallway, there's no visible angle of approach. Say something neutral, such as, "Good morning." The first level on the Use of Force Continuum is presence. Now he knows you are there. Where it goes from here depends on his response. He may turn around and pretend that everything is all right, then leave. Or he may indicate they were discussing something private and try to talk you into leaving them alone. He could say to her, "I'll see you later," then turn and march out. On the other hand, he may be defensive, potentially hostile.

The second point is, "Avoid invading the subject's personal space." When a subject is tense, their concept of personal space expands. In our scenario, stay close to one wall so the husband can go by on the other side if he chooses to leave.

The third point is, "Keep your body language open and non-threatening." This is verbal de-escalation. However, not all we say is in words. Body language says a lot, and for someone in the heat of emotions, it is louder than spoken words.

Adopt an interview stance. Stay a little off to one side, not face-to-face. Keep your feet at an angle. This is not an aggressive stance, but enables you to defend yourself if needed.

Point four is, "Avoid 'ganging up on the subject.'" In a potentially dangerous situation, it is important to have a backup. However, the second team member should stay back, letting the first one talk with the subject. It is not always mentioned in news stories, but the practice of police response teams when negotiating with a suspect is to let one officer talk.

Not only is deceit dishonorable, it is counter-productive. A disturbed person may sense deceit and become even more uncooperative.

Number six is "Avoid telling the subject to 'Calm down.'" Face it. They are already losing control, so they are unable at the time to calm themselves down. Rather, set the example - be calm yourself.

The seventh point is, "Give the subject an opportunity to explain." This takes the energy from the emotional heat and redirects it toward reason. Even explanations which sound unreasonable to us are more reasonable than a violent outburst. The time it takes to explain also gives them time to cool down.

Letting the subject explain may also give you clues to their mindset and understanding of what their life is like. Then when you do speak, you may know how to more effectively appeal to them. In 1Timothy 5:1-2 (NASB), Paul says, "Do not sharply rebuke an older man, but rather appeal to him as a father, to the younger men as brothers, the older women as mothers, and the younger women as sisters, in all purity."

The last three points are covered in another article.