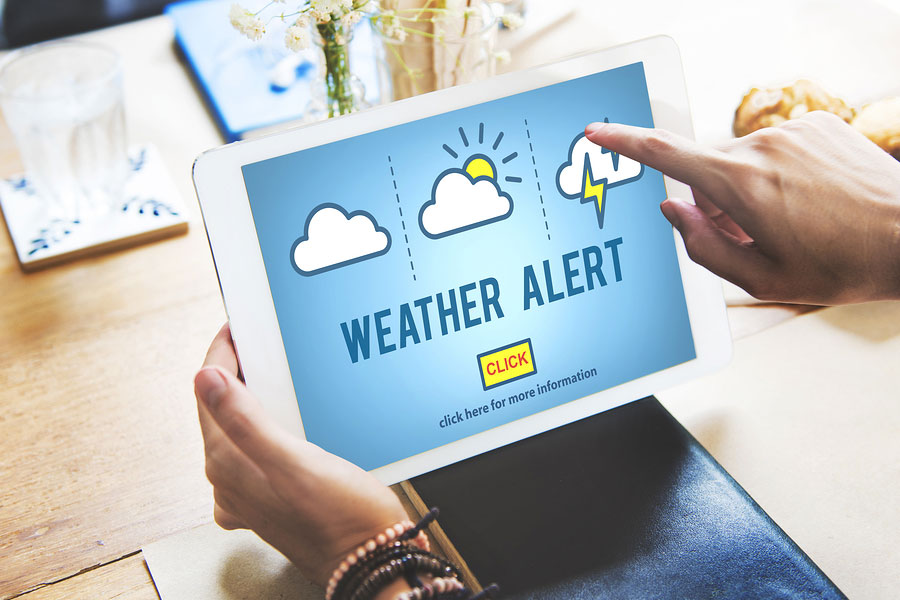 “When you see a cloud rising in the west, you say at once, ‘A shower is coming.’ And so it happens. And when you see the south wind blowing, you say, ‘There will be scorching heat,’ and it happens.” ~ Luke 12:54-55

The Whirlwind and the Wedding (A True Story)

Ohio, 2010 – The crowd in the sanctuary was expecting a beautiful wedding. The musicians began to play their instruments and sing. Suddenly the lights went out. A member of the church safety team came to the front and announced, “We have a tornado warning. One has touched down just south of here. Everyone is to go to the central hallway in the basement.”

After the all-clear was received, everyone returned to the sanctuary, but the power was still out. The wedding resumed with acoustic instruments, light through the windows, and doors opened for cooling.

In the verses above, Jesus told how people of that time and place forecast the weather. They knew their climate and knew the weather patterns for the season. This was before real-time reporting of weather across the country, satellite images, and Doppler radar. Today, someone can look to the west and say, “It looks like a front moving in,” then verify it with the weather forecast.

This may sound like, “We already know that,” to some, but it still needs to be said: know your climate. People who have moved to a different part of the country can experience a drastic change of climate. Even moving less than 150 miles (such as from Phoenix to Flagstaff in Arizona) or less than 100 miles (Lynchburg to Covington in Virginia) will significantly change your local climate because of changes in altitude and terrain. In other words, we cannot take the climate for granted based on another locality.

One example of changes in local climate is the distance from the Great Lakes and the “lake effect” on snow in Winter, or temperatures and rainfall in Summer. Chicago’s location at the tip of Lake Michigan is why it is called the “Windy City.” Even 30 miles matters.

For human-caused disasters, consider the industrial climate of your area, whether it be mining, drilling, refining, manufacturing, transportation corridors, etc.

The kinds of severe weather and natural or man-made disasters likely to be experienced vary by location:

Pacific storms on the West Coast and Alaska,

Nor’easters in New England and the northern MidAtlantic States,

Typhoons or Pacific hurricanes in Hawaii,

Heavy snowfall in the Mountain States, the Great Plains, and the Northeast (sometimes in the Southeast),

Tornadoes in the Midwest and the South,

Earthquakes along the Pacific Coast and (caused by drilling) in Oklahoma,

Volcanic activity on the “Big Island” in Hawaii, and in Alaska and the Pacific Northwest (as far as Northern California),

Hurricanes along the Atlantic Coast and the Gulf Coast (including tropical depressions in the eastern Midwest),

Petroleum spills/leaks wherever oil refineries are located, and where crude oil is drilled or transported.

At least two thousand years ago, people could forecast the weather by a day or part of a day by observing the signs, such as the color of the sky, clouds, and the direction of the wind. The interpretation of the signs depended on the season. What Jesus stated explicitly was the background for several other biblical statements.

Today, we depend on forecasts made by experts (meteorologists), especially for longer than a day. Some of us read weather maps. To understand the forecasts and the maps, we need to know the terms and concepts used: temperature, humidity, heat index or wind chill, precipitation, barometric pressure, isobars, and fronts.

The telegraph and telephone enabled persons in one location to warn others of approaching severe weather. Then came radio to broadcast weather forecasts. Paralleling these developments were advances in the science of meteorology, especially weather forecasting aided by Doppler radar and satellite imagery. Now we can tune into Weather Nation or The Weather Channel on TV 24 hours a day.

Along with weather forecasting have come weather alerts. On October 12, 1962, the Seattle World’s Fair was evacuated when officials were warned of an approaching severe storm. People had just enough time to get home before the Columbus Day Storm hit town. If that storm developed now, there would be several days’ warning as meteorologists saw the two storm remnants merging into a super storm.

Now we can watch a tropical low develop over a week or two into a tropical storm, then a hurricane, and people in the target areas can be prepared. Tornadoes do not give us as much warning. We can learn of conditions more likely to spawn a twister, but when a funnel begins, we have only minutes to seek shelter.

Weather alerts can be advisories, watches, or warnings. An advisory may simply tell us that weather patterns may favor certain conditions. Heavy rain or melting snow may lead to flooding in low-lying areas. Dry vegetation, low humidity, and a chance of lightning present a danger of wildfires.

A watch notifies us that a severe weather emergency (tornado, flooding, wildfire, etc.) is likely. A warning says it is here (such as a tornado has touched down, certain areas are flooded, or a landslide has closed a road). The church in Ohio received a tornado warning.

A tropical depression which is a hurricane remnant can bring heavy rain. In 1969, the tropical depression that had been Hurricane Camille brought catastrophic flooding to Nelson County, Virginia, after traveling north inland, then crossing the Blue Ridge. Alerts, if received and heeded, could have saved several lives.

In 1969 there was no alert system such as we have today. For one thing, communications were not the same. Many rural areas had little if any access to television. The 911 systems had not yet been set up, so there was no Reverse 911. According to Wikipedia[2], weather radio began with two stations in New York City and Chicago in 1960. By 1970, there were just 29 stations. In 1974, only 44% of the U.S. population had access to weather radio. Now the entire country, including Hawaii and much of Alaska, is covered.

Sheepdog Church Security recommends a weather radio receiver for each church. One can be found on “Safety Equipment”[3] under the “Store” tab, the Midland WR120/WR120EZ NOAA Weather Alert All Hazard Public Alert Certified Radio with SAME[4]. SAME stands for Specific Area Message Encoding. Your county’s SAME code can be found on the National Weather Radio website[5]. For instance, for Scott County (Belle Plaine), MN it is 028123; for Tuscarawas County, OH, 039157; and for Nashville (Davidson County), TN, 047037. Almost all counties in U.S. states and territories are covered.

Besides weather radio, weather alerts may be transmitted by Reverse 911. If the church has signed up for reverse 911, it will receive emergency alerts, such as evacuation advisories or orders.

Mobile devices, such as cell phones, smart phones, and tablets, can receive severe weather and other alerts. The user needs to sign up for them through the carrier (service provider). One advantage of this is that it can be locality specific, based on the cell towers used. This writer has received a tornado warning and flash flood alerts when away from home. It is advisable for safety team members to subscribe for this service and have your phones on vibrate (alerts only) when in a service or class.

If an emergency alert requires evacuation or shelter for the church, procedures should be in place for how to notify the people. Who monitors the radio? What means are used to notify others? Does the monitor radio the other team members to alert others in their areas? Does the monitor make an announcement on the public address system? This may depend on how spread out the church campus is and how time urgent the warning is. Other considerations are how many team members are present, what events are in progress, and where the people are.

Be Ready to Respond (Weather Preparation)

Is your church ready to respond to a weather emergency, non-seasonal natural disaster (such as an earthquake), or human-caused or technological emergency/disaster (such as a chemical spill)? Are the church buildings weather-worthy? Are your records secure in place and/or backed up off-site? Do you have needed supplies?

Safety team responses will be discussed under the different categories in following articles.

Your church building should be weather-worthy, constructed and maintained to meet the kinds of severe weather which may reasonably be expected in a twelve-year climate cycle for your area.

Ready for heavy rain – The roofs, windows, and doors of church buildings should be in good repair to prevent water damage to the structure and its contents.

Ready for strong winds – Do strong wind storms come through your area every year? Or every few years? Our church buildings should be able to survive most of these.

Ready for earthquakes – Not every part of the country expects strong earthquakes, but some do. On the West Coast, many building code requirements are for quake survivability.

Ready for wildfires – There are ways to minimize to some degree the risk and extent of wildfire damage.

Being equipped for severe weather and other environmental emergencies goes beyond durable equipment (such as radios). It also includes expendable items – supplies.

First Aid & Medical – While people can be injured or become ill under normal circumstances, the chances of injury and illness increase in dangerous situations, such as fires, severe weather, and other disasters/emergencies. Our church needs First Aid supplies for cuts, burns, fractures, and other injuries. It also needs CPR masks, AEDs, and over-the-counter remedies for common ailments.

Water and non-perishable foods – If church members are stranded in the church building for days during an emergency, or evacuees from the community are sheltered there, supplies are needed to feed and house them. Most critical is clean drinking water, followed by food (non-perishable in case the power is out), sleeping cots or mats, pillows, and blankets. Sanitation and privacy are also concerns.

Get this month’s resource, “Is Your Church Prepared for Severe Weather?” https://sheepdog-church-security.thinkific.com/courses/severe-weather-and-natural-disasters