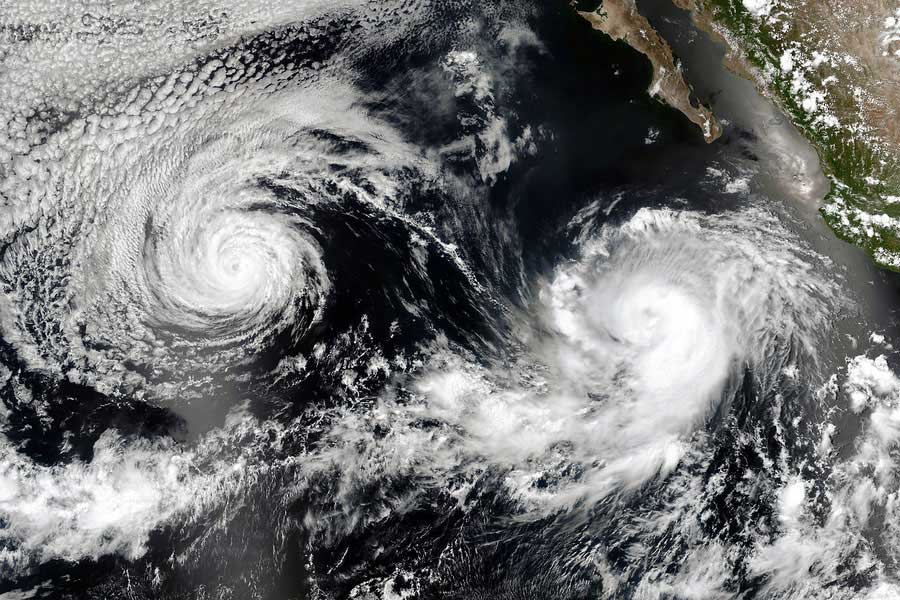 “And behold, a great wind came across the wilderness and struck the four corners of the house, and it fell upon the young people, and they are dead, and I alone have escaped to tell you.” ~ Job 1:19

From its chamber comes the whirlwind, and cold from the scattering winds. ~ Job 37:9

“I would hurry to find a shelter from the raging wind and tempest.” ~ Psalm 55:8

Since we were violently storm-tossed, they began the next day to jettison the cargo. ~ Acts 27:18

History is full of accounts of damaging winds. The accounts and references above are only a few of those recorded in the Bible. Windstorms can be as large as cyclones (including hurricanes, nor'easters, and typhoons) hundreds of miles in diameter, or as intense as tornadoes. Also included are derechos - straight-line winds over wide areas for long times - and downbursts.

Churches are not immune to windstorm damage. Here are a few news stories of winds damaging churches:

Saturday, March 2, 2018, Franklin, Virginia - The March 2 Nor'easter heavily damaged a storefront church on Main Street. The building is condemned and closed until repairs are made. Another local church is providing space for the congregation to meet.[2]

Wednesday, March 8, 2017, Rochester, NY - A powerful storm damaged a number of churches in the Rochester area. Winds toppled a cross which had been on the steeple of St. Mary's Church for 77 years.[3]

Sunday, May 10, 2015, Delmont, South Dakota - Tornado sirens sounded at 10:45 AM. Sunday School teachers at Zion Lutheran Church led their students into the basement. Other members went there too. The tornado damaged the church building, but no one was injured.[4][5]

Friday, June 4, 1993, Lynchburg, Virginia - Straight-line winds (now called a derecho) from a thunderstorm toppled steeples on two Lynchburg churches in addition to other extensive damage in the area from Bedford to Lynchburg.[6]

Sunday, October 21, 1934, Seattle, Washington - The strongest recorded windstorm in Western Washington before the 1962 Columbus Day Storm was in October 1934. Coming in on a Sunday morning, it damaged two large Seattle churches. One person was injured by debris from the chimney at a Methodist church. The chimney on a Catholic church broke through into the sanctuary 15 minutes after parishioners had left.[7]

As this is being written, tornadoes are in the news. Tornado season began more than a month ago in the South, while nor'easters were hitting New England. It peaks in late Spring and early Summer. Through Summer, it overlaps the hurricane season. Not only that, but hurricanes spawn tornadoes. In the South, it sometimes seems that tornado season is practically all year long.

Nor'easters are North Atlantic cyclonic storms that hit the Maritime Provinces, New England, New York, and the Mid-Atlantic states, coming in from the northeast, hence the name. Sometimes they merge with trans-continental winter storms, but they can come later in Spring. Rarely, a nor'easter may merge with a tropical cyclonic system moving northward along the coast, forming a super storm.

Whenever they come, they are destructive. As with any storm, materials ripped off building exteriors are hazardous to vehicles, pedestrians, and other persons nearby. For instance, when the nor'easter on March 2 damaged the church in Franklin, VA, it left bricks and other debris in the street and alley, forcing drivers to detour. If someone had been driving by during the storm, they could have been hit by bricks.

Hurricanes are tropical cyclonic storms. Like nor'easters, they form over ocean waters. Hurricanes draw their power from moisture rising from warm water. A hurricane begins as a tropical low. From this it progresses to a tropical depression (when it exhibits wide-area rotation), a tropical storm, and finally a hurricane with sustained winds over 70 mph. There are five categories of hurricanes, Category 1 through Category 5. The category is defined by the sustained wind speed.

Hurricane season usually begins in June, though in some years tropical storm activity has begun in May. It usually lasts until the end of November, though there have been later tropical storms.

One notable exception to the May-June start of hurricane season was mid-March 1993, when an un-named tropical storm developed in the Gulf of Mexico, grew in size and strength to hurricane proportions, and expanded northward over the eastern states until it stretched from Honduras to Canada. Warm, moist air colliding with cold air blanketed its path with heavy snow from the Florida panhandle to New Brunswick. Known as "Superstorm 1993" or "The Storm of the Century," it canceled thousands of Sunday morning church services.

Hurricane remnants - tropical depressions and lows - can still cause damage far inland. In September 2008, the remnant of Hurricane Ike moved north from the Gulf through Midwest states, regaining hurricane strength when it reached the Great Lakes. It passed through Ohio on Sunday evening when many churches had services. A few hurricane remnants have brought flooding to New Mexico and Arizona. What this means for us, is that hurricanes are more than a coastal hazard.

Building for a Storm 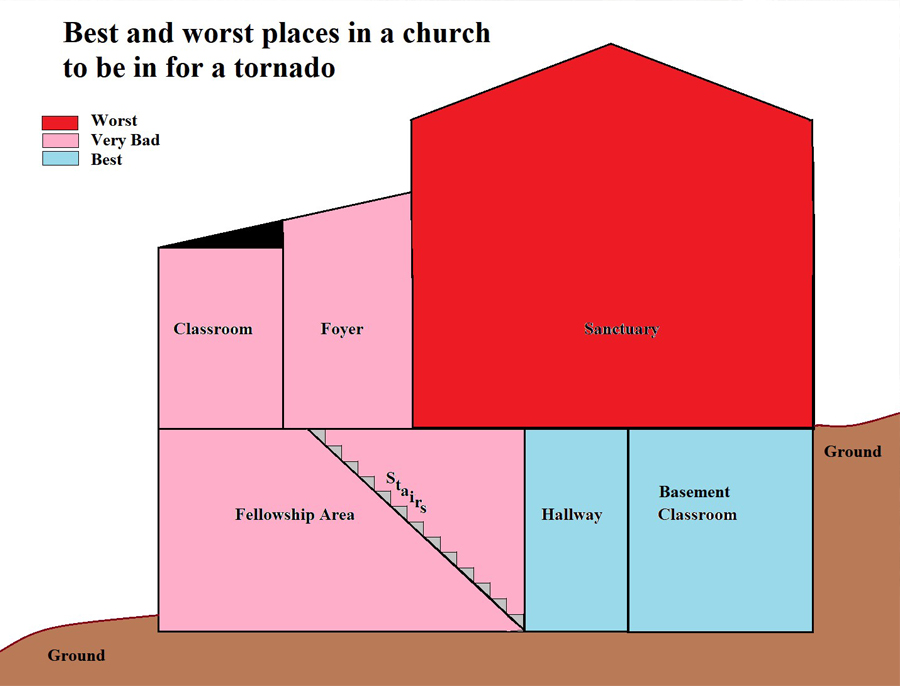 In Matthew 7:24-27, Jesus told about two men who built houses. One house had a foundation which went down to bedrock. The other was built on unstable sandy soil. When a severe storm came, the first house survived, the second did not. The point is that how a building is constructed, beginning with the foundation, determines how it weathers storms.

Once the foundation is set, how the rest of the building is built (or "fitted together" in biblical terms) matters. In this regard, there are guidelines and building codes for making structures to withstand the kinds of storms expected in a region or local area. These cover things such as roof loading and wind shear resistance. A prime example is the Miami-Dade building code designed for hurricane readiness.

A key consideration is safety of occupants and passers-by. Where windstorms are concerned, this means having places in the building where people can take shelter. In fact, where tornadoes are common, storm shelters are part of the building codes for public meeting places, such as churches, and places of employment, such as factories and warehouses.

If your church building is in a tornado-prone area and is grandfathered in because of its age, your Church Safety Committee should identify places which qualify as tornado shelters. If there is none, consider providing one. If a tornado hits, you'll either be glad you had, or wish you had.

RIDING OUT THE STORM

The first consideration of riding out a storm is finding shelter. A good storm shelter will protest its occupants from flying and falling debris, including trees, roof beams, walls, and miscellaneous objects carried by the wind. Tornadoes have picked up vehicles and dropped them several yards away. Nor'easters and hurricanes have done the same to boats. Straws have been driven through tree trunks. Never underestimate the potential power of moving air.

Storm shelters can be in the ground, in the basement, or well within a building. They need short ceiling beams in at least one direction (a hallway fits this description). It can be rooms in a basement which are essentially underground. A church building needs enough shelter space for all the people attending a service, classes, or an event. It may be a little crowded, but everyone should be able to get in without suffocating or crushing. Lives were saved in Delmont, SD when everyone went to a secure area in the basement.
A shelter should not have windows to the outdoors, but should have some passive ventilation (not depending on fans). It can have small security windows to adjoining rooms. An inward opening door with a heavy bar lock will allow occupants to remove the bar and open the door after the storm has passed, even if debris would block an outward opening door

Once we know how to get people to shelter, it's time to plan and carry out tornado drills. Schedule them when the greatest number of attendees can participate. Evaluate them afterward to see how well they went. How can the sheltering procedure be improved?

When the Storm Is Past

For those of us who have had to use tornado shelters, usually no more than an hour or two has been spent there. Most of us have emerged to find the twister has missed our building, but some have opened the door to scenes of destruction. But what if we can't get out? How will we make it in our building for a day or two, maybe more?

If we get water from a well and there's no power, then there's no water. So how about sanitation? How about drinking water?

How about food? We might make it for more than a day not eating, but by the third day most of us will need to eat something. Some among us may need it sooner, especially young children and persons with health issues. An emergency supply of non-perishable foods would be a good idea.

Going more than a day, how and where will we sleep? Do we have cots or roll-out foam rubber mats? Blankets?

A storm shelter in the church should have a place to store emergency supplies in case the normal storage areas are destroyed. This also includes First Aid and medical supplies.

A Place of Refuge

If our church building has been spared major damage, but homes in the community have been destroyed or seriously damaged, the church may become a shelter for displaced persons or evacuees from other communities. Many churches served this function after Hurricane Matthew. Are we ready for this? We can consider this an opportunity for ministry.

The primary resource for this article is the Sheepdog Church Security downloadable training bundle, "Severe Weather and Natural Disasters v3" [1]

Get this month's special resource, "Is Your Church Prepared for Severe Weather?" https://sheepdog-church-security.thinkific.com/courses/severe-weather-and-natural-disasters