Taking Security into Your Hands 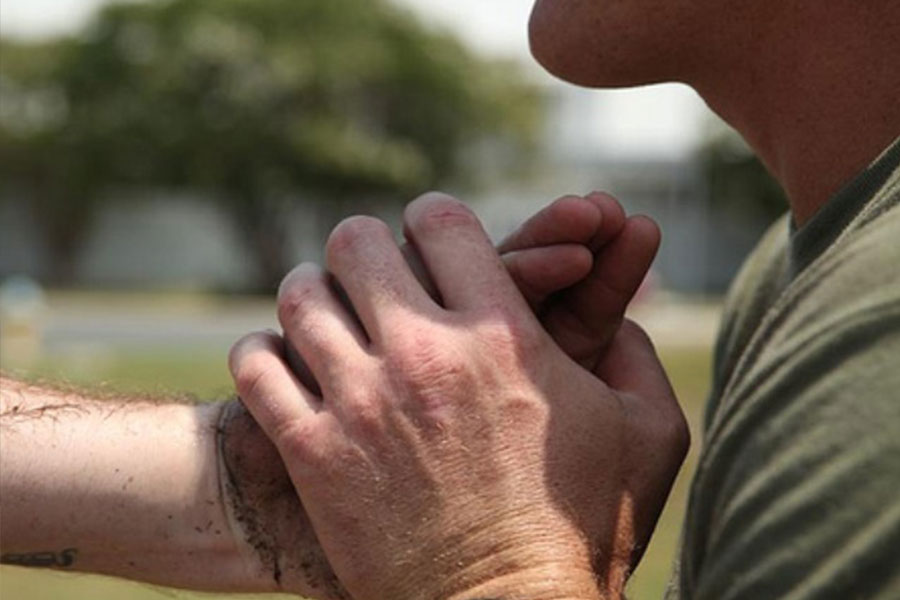 And Jacob was left alone. And a man wrestled with him until the breaking of the day. When the man saw that he did not prevail against Jacob, he touched his hip socket, and Jacob's hip was put out of joint as he wrestled with him. ~ Genesis 32:24-25 (ESV)

One of the most ancient sports is wrestling. Basically, this is an attempt to gain control of an opponent without the use of weapons. Pure wrestling is grappling, which means control by how one holds the opponent, forcing him to the ground and holding him there. This is the kind used in high school, college and Olympic wrestling. Judo is another wrestling format, which also includes throwing the other person.

However, wrestling is not just a sport. Many times it is serious business. Its role as a sport originated as a test of strength and of the skills used in war and self defense. Proficiency in these skills was vital in an era with few trained armies and no organized law enforcement agencies. Wrestling was only one of the skills, but there were times when someone would encounter a threat when unarmed, or when deadly force was not necessary or was undesirable, such as with a loved one.

There are times in church security when talk is not enough to de-escalate a situation. Or someone has to be stopped, and they do not heed calls to stand still or leave. Most laws and protocols hold that security persons use only the level of force needed which is appropriate to the threat. Force can be as light as putting a hand on a boy's back and saying, "Johnny, you need to cool it. Let's go into the next room and sit down." If that works, that's enough.

When the initial force does not work, and the threat continues, the needed force level goes up. The National Institute of Justice has published "The Use-of-Force Continuum." This ranges from "Officer Present" to "Lethal Force." This subject is covered in the Sheepdog Church Security articles "Use of Force and Citizen's Arrest Laws" and "A Reasonable Defense - Use of Force in Churches."

Police officers are usually trained in all levels of force, beginning with de-escalation. This includes how to use their hands and arms to bring a subject under control. In many ways, these moves resemble wrestling, Judo, and other martial arts. And police do use this training. In April 2015, Jesse Kidder, a police officer in New Richmond, Ohio, stopped a murder suspect without using his weapon.

The man Jacob wrestled was really an angel who limited his strength to that of a man. Jacob was able to hold his own for a long time. To end the match, the angel touched Jacob's hip, finally using his angelic power to dislocate the hip.

We do not have angelic powers, but we can use pressure points. These are places where pressure can restrict a key artery or pinch a nerve. For instance, pressing a nerve just above the clavicle can cause a subject to loosen his grip.

For those of us in Church security ministries, training is available on the techniques used to control an uncoöperative person. The best online resources for the actual holds and moves include videos. Printed materials have drawings and photos showing how to place the hands and how to move. The best training is in-person instruction and coaching with practice.

Properly trained, a small person can take control of a larger person with holds and moves. There are some holds, positions and moves which actually give a smaller person the advantage. For example, in the so-called "Indian wrestling" popular 50 years ago, a smaller contestant could throw the other one off balance by pulling down in a line perpendicular to the larger opponent's stride.

In a real-life church security situation it is seldom that simple, but there are ways of bringing a large person to a halt. Control techniques instructors show how to position your hand or foot in a hold so that the subject cannot easily knock it loose. They show you which way to put your arm or leg around or across the offender and which way to move it.

If you want to learn how to use "hands-only" defensive moves, Sheepdog Church Security's Church Security Guide has a training session, Control Techniques and Self Defense, which instructs your team in Self-Defense: Holds, Locks and Takedowns. Local trainers can provide in-person training in these skills.