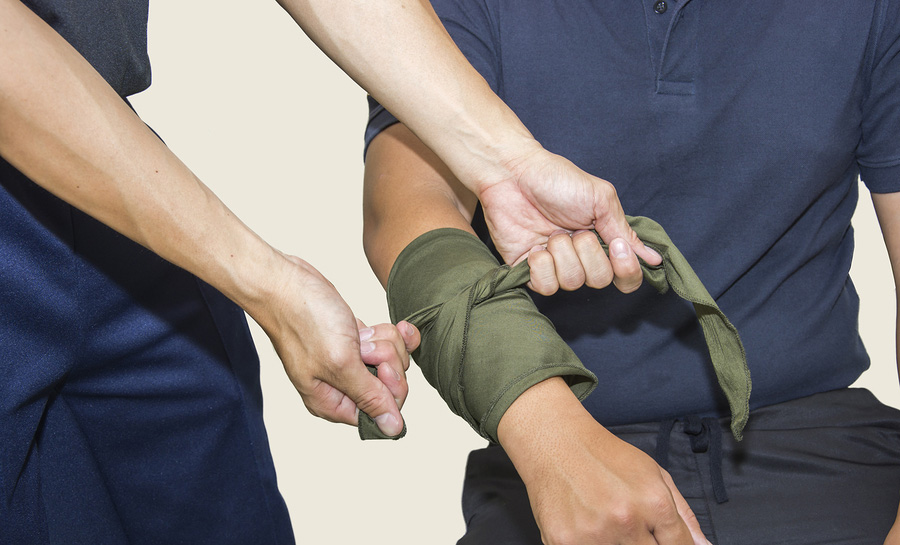 For the life of every creature is its blood: its blood is its life. ~ Leviticus 17:14

And immediately the flow of blood dried up, ~ Mark 5:29

He heals the brokenhearted and binds up their wounds.. ~ Psalm 147:3

"BBB" is commonly recognized by the public as standing for the Better Business Bureau. But for us in this article, it will be the Bleeding and Broken Bones of trauma (severe injuries), whether accidental or intentional.

For safety and security ministries in our churches, these BBB injuries are safety concerns. Whether someone falls, is hit by a vehicle or falling objects, or is shot, knifed, or clubbed by an assailant, severe injuries need immediate attention, especially those with serious bleeding and fractures (or likely fractures) to the skull, neck, back, hip, or thigh.

This is when First Aid is most critical. Everyone on the safety team, as well as leaders of kinesthetic activities (such as sports and hiking), should know how to stop bleeding, immobilize broken bones, and avoid further injury, critically when dealing with possible spinal or cranial fractures, and to a lesser degree with pelvic and femoral fractures.

It's Critical to Stop Bleeding

There is a continuum in severity of bleeding. This ranges from some blood oozing from abrasions (skin scrapes) to the uncontrollable flow from a ruptured or severed major artery. For an abrasion, the primary concern is cleaning the wound. For minor cuts, stopping bleeding is relatively easy. For major cuts, tears, and punctures, it is more challenging and more critical, because the injured person can bleed to death.

The American College of Surgeons convened a meeting of medical groups, law enforcement agencies, the military, and government security agencies in Hartford, Connecticut. This was in response to an increase of intentional mass casualty events (such as mass shootings) and their rising severity. Their conclusion stated in part:

How to Stop Bleeding

Since ancient times, there have been ways to stop bleeding. The Roman army had medics who traveled with the soldiers. They were trained in treating wounds and some common illnesses. Among their skills, they could stop bleeding. Thanks to them, many wounded Roman soldiers lived to fight another day. Over time these techniques have been refined to the methods we use today.

Before starting, see what kinds of injuries the person has:

The two universally recognized methods for stopping bleeding are (1) Apply Pressure, and (2) Raise the Area (if on a limb). These are followed by (3) Cleanse, (4) Protect, and (5) Call for Help. In the following instructions, the injury is called a "wound" whether a cut, tear, or puncture.

This is the oldest technique to stop bleeding, and still the most effective.

If the wound is on a limb, raise the limb higher than the heart to reduce blood pressure. If the limb is a leg, the patient should be lying supine (on the back). Hold or prop up the leg until bleeding has been stopped.

A wound needs to be cleansed to prevent infection, but only after bleeding stops. In Jesus' parable, the Good Samaritan cleansed the wounds of the man who'd been robbed (Luke 10:34).

After cleansing, cover (bandage) the wound with sterile cloth or gauze. Tie or tape the packing so it stays in place. Don't tie too tightly. The Good Samaritan bound (bandaged) the robbery victim's wounds.

The patient should be taken to a doctor if

When a bone is broken, the first concern is to not flex the break. Leave setting the bone to the doctor, who is equipped and trained for that. The best we can do is to insure that the broken bone is immobilized to prevent further damage. This may be done by splinting - binding a stiff object (metal or wooden rod) to the limb that is broken. A broken finger may be taped to an adjacent finger.

Some fractures are of special concern.

As members of safety ministries in our churches, we must be prepared to treat injuries, whether accidental or intentional, following the example of our Lord, as foretold in Psalm 147:3 - "He heals the brokenhearted and binds up their wounds."

Every member of the safety team should learn BBB response, especially how to control bleeding. Ideally, this should be taught not only safety ministry personnel, but as many church members as possible. Besides instruction, there should be practice.

Hear Kris and Ron discuss the subject of this article on the podcast: https://soundcloud.com/churchsecurityrollcall.