Awareness of a Need for Verbal De-escalation 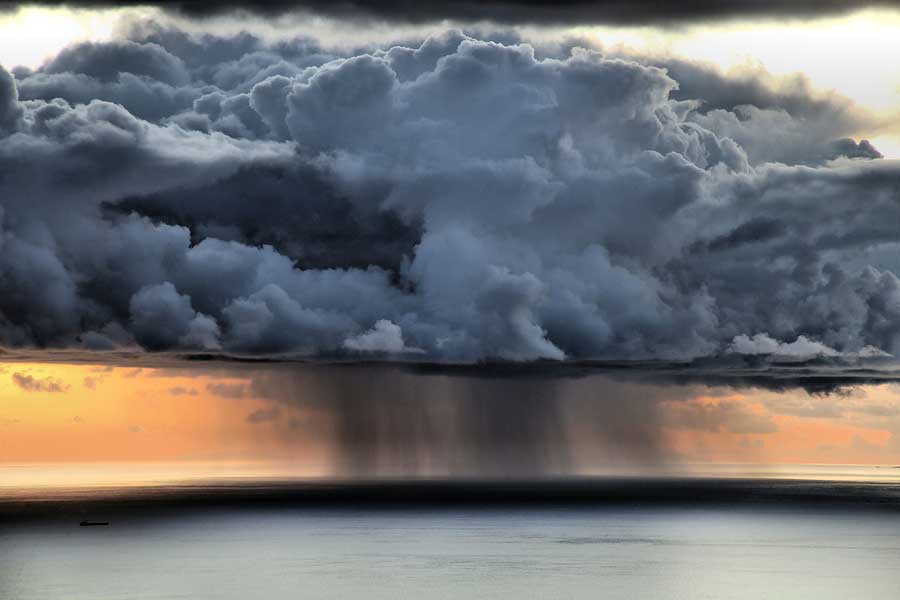 … but for Cain and his offering he had no regard. So Cain was very angry, and his face fell. The Lord said to Cain, “Why are you angry, and why has your face fallen? (Genesis 4:5-6)

Either Charles Dudley Warner or Mark Twain said, "Everybody complains about the weather, but nobody does anything about it."-[2] We cannot do anything to change the weather, but (as was covered in the March articles) we can watch it, calculate its likely development, and prepare to deal with it. Jesus referred to people's ability to forecast the day's weather from what they saw (Matt. 22:18). In some areas and seasons, dark clouds indicate a possible thunderstorm and/or tornado.

Weather watching has supplied several metaphorical idioms, such as "sunny days" and "gray days" and "storms of life." One such idiom appearing in several publications is "seeing dark clouds," which means sensing a less favorable near future, whether in economics, politics, international affairs, health, or other areas of concern.

This applies to Church Safety Ministry, seeing dark clouds as a developing situation moves toward disruption, perhaps even toward violence. We can watch the relational weather in the church, both long-term and immediate, to perceive its development and respond accordingly. Unlike the weather, there is something we can do to influence the outcome, to forestall - perhaps even dissipate - the dark clouds of disruption.

This is the age of long-range weather forecasting. For example, during this past Winter, the National Weather Service and mass media meteorologists accurately predicted storm systems which would hit the West Coast or move south from Western Canada and sweep across the continent. This included the paths of the storms, the areas affected, and the impact. They did this by using satellite imagery and measurements, reports of ground and ocean surface conditions from around the globe, and analysis of the data.

In a congregation, threat assessment can forecast the potential for disruptive behavior, even violence, by persons in the congregation, persons associated with church members, and known persons in the community. We can't analyze it to the same degree as the meteorologists, but we can identify those who need to be watched. This can be an opportunity for ministry. For some, intervention in the form of personal counseling may be possible and successful. At the least, we can pray for them and for wisdom in dealing with them. We can't change the weather, but there is hope for a person at risk.

Solomon said, "Know well the condition of your flocks" (Prov. 27:23). Knowledge leads to the power to prevent or mitigate disruption and violence. Under Prevention, the Sheepdog Church Security training course lists six warning signs of a person at risk that the Canadian Centre of Occupational Health and Safety says should be discussed by a Threat Assessment Team[1][3]:

Each of these points has several questions to consider.

As a case in point, the Sutherland Springs church shooter had the first, second, third and fifth traits on the list. His behavior and demeanor half a week before the shooting made some members, including elders, uneasy. Yet no measures were taken, such as asking for police protection. To use a metaphor, dark clouds were seen, but no one grabbed an umbrella or headed for shelter.

Several times situations push a person toward disruptive behavior. If we are aware of these, we can be more understanding when trying to de-escalate a developing disruption.

A skill taught to law enforcement officers, military personnel, security services, correctional officers, health care workers (especially in mental health), and educational administrators is Situational Awareness. More than a skill, it is to become a pattern of life, an ingrained habit. It is continually noticing one's surroundings and taking note of large and small details. A former member of a U.S. military commando service revealed one part of his training. He had to step into a room, glance around the room, exit, then describe to the instructors as much detail about the room as he could remember.

To be able use verbal de-escalation to defuse a disruptive situation, a Security Team member needs to sense early enough that it is developing. This is where situational awareness comes in. Many websites promoting or teaching situational awareness apply it to self defense (also used in Church Safety Ministry) or resolving workplace issues (such as conflict resolution). But the basics are the same, such as these:

What to Look for

While observing people in the church (or at a church event), you should notice their appearance, their demeanor, and their actions.

In persons you know, watch for changes in behavior which may indicate personal trouble or personality changes. Here are a few:

Sometimes a person's physical appearance indicates that they are vulnerable and may have an outburst. Also, does anything hint at intoxication by alcohol or drugs? Here are a few signs:

We should also pay attention to what is happening and how it progresses.

Ideally, situational awareness should lead to remedial action, including verbal de-escalation to defuse a hostile situation before it becomes disruptive or violent. This intervention usually begins by approaching the person in a non-threatening manner and engaging them in conversation.

Other articles in this series on verbal de-escalation cover underlying causes of disruption, calming words, being in control, and following through.