Protecting Children from Violence: All Kinds, Including Active Shooters

Then Pharaoh commanded all his people, “Every son that is born to the Hebrews you shall cast into the Nile. - Exodus 1:22

You shall not mistreat any widow or fatherless child. ~ Exodus 22:22

Then Herod, when he saw that he had been tricked by the wise men, became furious, and he sent and killed all the male children in Bethlehem and in all that region who were two years old or under, according to the time that he had ascertained from the wise men. ~ Matthew 2:16

Then Pharaoh commanded all his people, “Every son that is born to the Hebrews you shall cast into the Nile. - Exodus 1:22

Sunday, November 5, 2017, Sutherland Springs, Texas - 14 of the 26 persons killed in the massacre at the First Baptist Church were children.

Sunday, September 15, 1963, Birmingham, Alabama - In an act of terrorism by white supremacists, a bomb planted against the basement wall of the 16th Street Baptist Church exploded, killing four girls in a Sunday School classroom.

Wednesday, January 11, 2012, Cordell, Oklahoma - Two boys, aged 12 and 13, participating in youth wrestling, got into an argument and began fighting. The 12-year-old died from injuries. 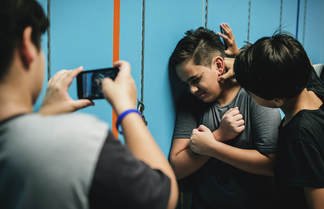 With the prevalence of news reporting, there is no excuse for thinking, “No one would hurt a child.” The evidence is too clear that children are hurt by violence every day, not only now, but in history, both recent and ancient.

No place with people is immune from violence – at least not in this present world. This includes homes, schools and churches. The news items cited above are of children killed in churches. In Texas, it was a spillover of domestic violence. In Alabama it was an act of terror. And in Oklahoma, it was the result of a dispute between two youth.

With the possibility of violence against children in the church, it is the responsibility of the Church Safety Ministry to do what we can to protect our children from violence.

What kinds of potential violence do our children and youth face? Because it makes big headlines with continuing stories, most of us think of mass killers, especially since the church massacre in Texas. But children are also at risk of violence in church from church staff and teachers, disruptive persons in the church, and other children or youth. Also, children coming to church may be experiencing violence in school, at home, or in their neighborhoods.

Attacks by active killers are actually the least likely kind of violence for our children to face, but they are potentially the most deadly, as well as the least expected. The motives may be terror (as in Birmingham), domestic anger (as in Sutherland Springs), or generalized anger and anti-social feelings. Sheepdog Church Security has several articles dealing with active killers, such as “Killer on the Loose” [10] and “Survival Instincts - Emergency Skills for an Active Killer Incident” [11]. “Behind Closed Doors: Protecting Children Through Lockdown Drills” [12] stresses the defense tactic of lockdowns and using drills to prepare teachers and students in case of a mass killer incident.

Keeping an active killer from entering the church in the first place [13] [14] goes toward child protection. There are times when children are in the sanctuary, which is difficult to lock down.

Violence by staff and volunteers is repeatedly discovered and reported (during the past year Kris Maloney has shared news articles of some incidents). The way to protect our children and youth from this kind of violence is by selection (screening applicants), education (training staff and volunteers in the law how to manage anger, how to manage kids without violence), and supervision (monitoring and accountability). These same measures should be included with those for preventing child abuse in general. [15]

Attackers coming in with the intent to kill are covered above. Here we mean persons who become disruptive after coming to the church or a church-related event. [16] A potentially disruptive person may be dealing with a crisis in his or her life, such as huge medical bills, loss of employment, business troubles, disruptive neighbors, marital problems, health conditions, etc. That person could be clinically depressed, on the down side of bi-polar, or mentally disturbed. Maybe there are personality maladies, such as borderline personality disorder. [17] Some individuals may be schizophrenic.

In cases like these, protecting our children from violence begins with recognizing persons at risk [18] and employing verbal de-escalation. [19] If the person does resort to violence, we resort to self-defense. [20]

Contrary to what some feel (or believe), those “little dears” can become violent enough to cause injury, even in a church or at a church event. There are reasons for this.

When we do recognize signs that a child may become violent, the first course of action is verbal de-escalation. [22] There are several institutional and professional organizations (such as the Training and Technical Assistance Center at Old Dominion University [23]) with instructions on how to use de-escalation with children. The Safety Ministry may help them receive this training.

There is always the chance a child or adolescent in our church’s classes and/or programs suffers violence outside the church. Staff and volunteers working with children and youths may be aware of signs of this. If they see indicators the young person is experiencing violence in the home or at school, they should report this to the leadership, who have the moral and legal duty to investigate and report this as they would child abuse. [24]

Some people will automatically assume that if a child in their care is experiencing outside violence, it is in the home. But that is not always the case. Many children are bullied by other children or youth at school or in their neighborhoods, and not always in the inner city or rough rural communities (such as logging towns). Bullying is not exclusive to lower social classes.

If you suspect outside violence, converse with the child. Show him or her that you care. When you get the child’s confidence, she or he may open up and let you know where the violence is and who does it. Many kids don’t tell their own parents or teachers that they are being bullied. If the child is being bullied, the parents need to know. In any case (whatever the explanation), if the child regularly has visible injuries, the authorities need to know – report it. They will investigate.

What Do We Do?

To prevent violence against children in the church, the Church Safety Ministry addresses this as an issue, evaluating the risks of violence, including the location of the church and the areas it serves. Then we plan how to protect our children from violence, especially the kinds specific to children. Once we decide the best reasonable way to protect our children and youth from violence, we devise a child violence protection policy suitable for the size and situation of our church. Then we establish procedures to carry out this policy.

When the policy is adopted, we notify church leadership, staff, and volunteers, including the Safety Team, of the policy and procedures. Then we train them in how to implement the procedures. Training should include role-playing some situations. The violence protection policy will be also be covered during annual refreshment training.

Now Is The Time

Don’t wait until it is too late. Plan now how you will protect the church’s children from violence.