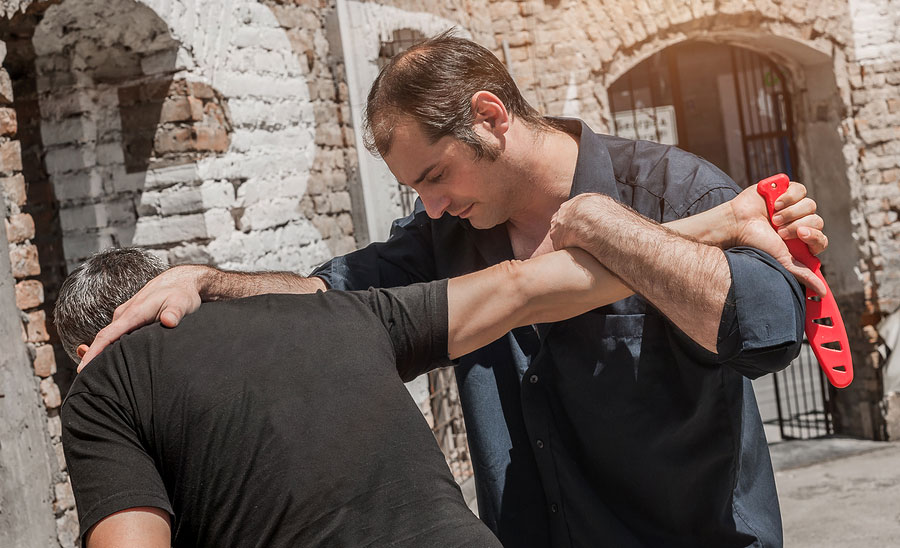 For we do not wrestle against flesh and blood, but against ... the spiritual forces of evil ... In all circumstances take up the shield of faith, with which you can extinguish all the flaming darts of the evil one (Ephesians 6:12,16).

And behold, a young lion came toward [Samson] roaring. Then the Spirit of the Lord rushed upon him, and although he had nothing in his hand, he tore the lion in pieces as one tears a young goat (Judges 14:6a)

On Alert! At the Ready! Action!

Your situational awareness (1) tells you the man who just came in the door is troubled. Maybe you could help him. You walk over to him, stopping at a safe distance, assuming a non-threatening, defensible stance (2).

Mr. Donald Brown is troubled, alright. He came home from work to find that his wife had cleaned out the house, leaving only a card table, a chair, and a can opener. He came here looking for her, since she had been a member years ago.

As Mr. Brown talks, he becomes agitated. You try to cool him down, but he is inconsolable. Then he looks you in the eye.

"Maybe you don't know, but someone here does. They're hiding her. Right here! Take me to her!!"

"Please sit down here while I call someone to help you." You gesture to a chair.

"You're hiding her!" Mr. Brown starts to take a swing. Now what do you do? You parry the swing.

Parry? What is that? According to the Merriam-Webster Dictionary (3), the first meaning of "parry" is, "to ward off a weapon or blow." First used for blocking a stroke or thrust by an opponent's sword - whether in war, in a duel, or in fencing - it has come to mean blocking any kind of attack. For church safety and security teams, it means stopping a threatening blow in close quarters, whether the strike is with hands, feet, or any other body part, or with a device, whether an impact weapon (such as a cane), an edged weapon (such as a knife), or a firearm.

We are at Level Yellow (ready in case) when on Safety Team duty at church. Seeing a troubled person, such as Mr. Brown, puts us on Level Orange (specific alert). We notice the person's facial expressions, hear their tone of voice, and see their body language. Sensing that they are beginning to attack, we move to Level Red - poised for action. But how do we parry their move? That all depends … 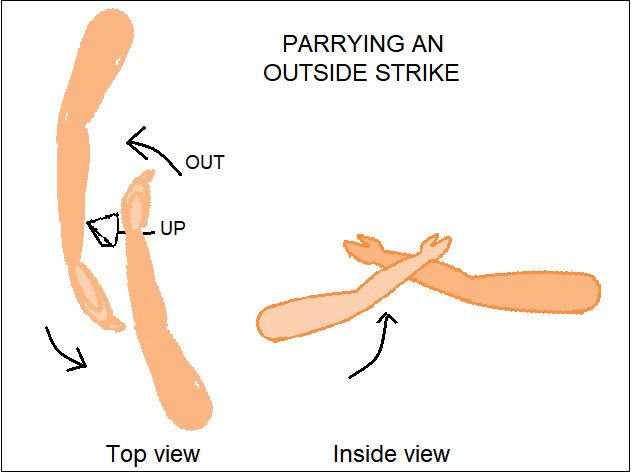 Unless you're facing a triple Black Belt in martial arts, this seems to be the easiest threat to parry - at least when they use only their hands. If they start with their hands at their sides to make an outside strike, simply raising your hands up and out should block the blow.

If the person has their hands in front of them and makes a straight thrust, you have to move your hands and arms differently to block them. And if they cock the arm for a haymaker, another form of duck and parry is called for.

If the subject's attack is with the feet, other means of parrying are used. One point here is that we are alert not to just the hands, but the whole body. The right stance and distance lets us be aware of the body language, head-to-toe. What we can do depends on what we have learned and practiced. As Kris said in the podcast for "On the Lookout", security team members should practice situational awareness regularly so that they are habitually aware of indicators of weapons carried, mood, possible intent, developing moves, etc. (5).

If the subject has a hidden weapon, that gives you, the defender, two advantages, providing you are alert.

First, you may have detected or have reason to suspect a concealed weapon. This may give you some idea of what kind it is, and you can predetermine how to thwart an assault.

Second, since the weapon is hidden, the potential assailant would have to pull it out of hiding. Discerning a move to bring out a weapon gives you time to respond. If you know how to parry the attack with your hands and disarm the assailant, you don't need the time to draw your own weapon (if you have one). Even a handgun can be knocked loose before it can be brought into firing position, if you are alert and quick enough - but first practice this with a partner carrying a toy gun.

In this regard, at least since World War II, our military services have been teaching soldiers, marines, airmen, and sailors how to fight an armed opponent while unarmed, since they may have to face this situation for a number of reasons, such as running out of ammunition (6)(7).

It is not enough to just parry a blow from a violent person. The situation has to be brought under control to keep it from escalating. Controlling an assailant with a hold should bring the disruption to an end and give us time to get help.

Many of the self-defense courses, especially military ones, go on to potentially lethal techniques. Frankly, as a church safety ministry, we do not want to be deadly without just cause, such as when the attacker is actually shooting, stabbing, or otherwise using lethal force. If we can disarm an attacker and bring him or her under control, that should be enough. Let law enforcement come in and take it from there.

Most of the time, it is not deadly force we face, but an emotionally-based disruption, as in our story. Some type of hold may be needed just to gain control and bring calm. Many times, unless the person is extremely angry, or under drug influence, they will calm down once stopped.

An escort hold can be used to take an uncooperative disrupter outside or to a room. This will remove the disruption from a more populated area (such as the foyer or sanctuary), making it safer for the crowd. It will also give the person more time to calm down.

Paul wrote that did "not box as one beating the air" (1 Corinthians 9:26b). When we have to ward off a blow and bring a disrupter under control, we need to do it effectively.

There are several online sites telling and showing how to parry. As with situational awareness, this needs to be practiced until we naturally carry it out effectively in a disruptive incident. The lessons for parrying attacks go on to gaining control over the attacker. When practicing how to parry, go through to executing holds. Also, practice holds meant simply to gain control over an uncooperative person.

Since our focus is on protecting people as a ministry, self-control is a key to success. Practicing situational awareness, holding the right stance at the right distance, and bringing a violent or uncooperative person under control, trains and conditions our reflexes to do the right thing effectively without using excessive force. Then our self control serves as part of our witness to the community. But first of all, we need the self-control which comes from the Holy Spirit. Solomon wrote in Proverbs 16:32, "Whoever is slow to anger is better than the mighty, and he who rules his spirit than he who takes a city."