It CAN Happen Here 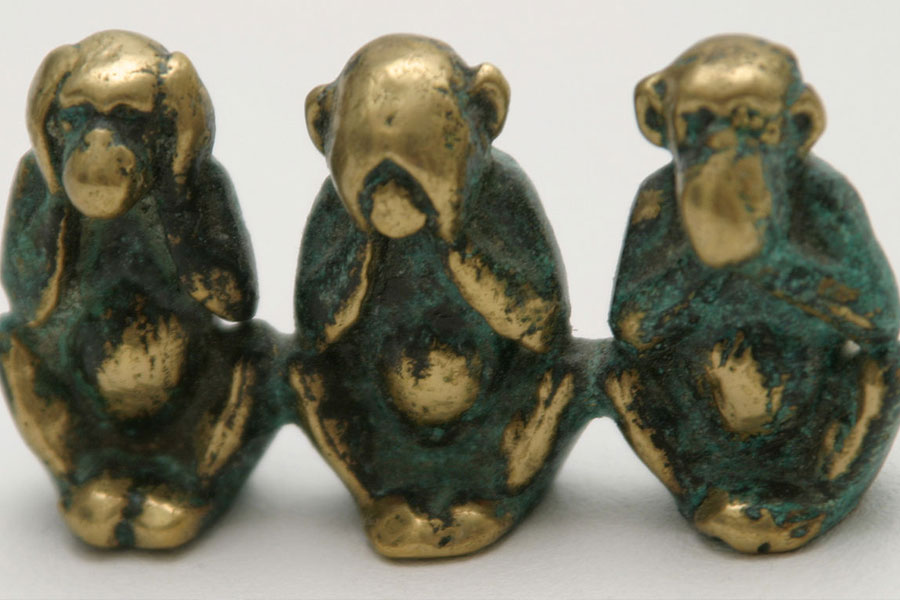 Therefore let anyone who thinks that he stands take heed lest he fall. ~ 1 Corinthians 10:12

Be sober-minded; be watchful. Your adversary the devil prowls around like a roaring lion, seeking someone to devour. ~ 1 Peter 5:8

Most of us are familiar with the Three Wise Monkeys. One covers its ears, one its eyes, and the third its mouth. This primate trio represents an ancient proverb: "Hear no evil. See no evil. Speak no evil." This may be good advice for avoiding gossip and generally staying out of trouble. But when it comes to safety and security, it should not be taken literally, at least not in the sense of refusing to see what is happening all around us.

We should be watchful, aware of any danger. We should not take our security for granted. Following tragic news, I have heard people say, “It can’t happen here.” They also say, “It’s never happened here.” Well, for every place tragic accidents and criminal activity occur, there was a first time. We should admit, “It CAN happen here.”

This is especially true for those of us who are responsible for the safety and security of other people, whether the community, a business, a school, or a church.

One example of people who took their security for granted is recorded in Chapter 18 of the Book of Judges in the Bible. The tribe of Dan could not expand from mountain camps into the fertile valleys of their tribal allotment because the Philistines were too strong. So they looked for a place to move. Scouts found a rich valley in the far north of Israel still occupied by Canaanites. The chief city was Laish.

Laish was described as an easy target. The people felt secure, “quiet and unsuspecting.” Since they had little if any contact with anyone else, if they thought about Israelite conquest they thought, “It can’t happen here.” Not only could it happen there, it did. Danite warriors conquered the city, killed the people, burned it down, and made the territory theirs.

The Safety/Security Committee, Safety/Security Director and Safety/Security Team in a local church must stay on guard, be alert, watch for any sign of trouble. Not only does this include stormy weather, fire, burglary, robbery, embezzlement and potentially violent disruptions, it also includes threats to vulnerable persons, especially children, such as molestation and kidnapping.

Likewise, the Safety/Security ministry is responsible for detecting and dealing with danger. There are some dangers, though, which are easy to ignore or dismiss. It is easy for us to think, “Not here.” Among these are embezzlement and sexual abuse. These violations are likely to be committed by people we know, people we would not normally suspect. Paul told the Philippians to “Look out … for evildoers” (Phil. 3:2), and several biblical authors warned against dangers from within.

Embezzlement is limited to persons with access to the church’s cash, bank accounts, and other resources. But when it comes to sexual abuse, we can be surprised at the perpetrators. They are not always the “dirty old men” we were warned about when we were children. They can be men and women of any age. News stories abound with accounts of youth leaders, scout leaders, teachers, and pastors involved in sexual abuse.

Offenders even include teens. For example, a recent new story concerns a mid-teen boy who molested a sub-teen. Actually, most adult offenders began in their teens, at or not long after puberty. One much head-lined case has been the oldest son of a well-known TV family. It usually begins with those closest to the offender, family and family friends. Perpetrators don’t usually go far to find their victims. It is often in the neighborhood, in the school, and in the church.

There are resources available to help the Safety/Security Ministry and other church staff in discerning signs of potential and actual sexual child abuse and preventing it, as well as how to deal with it when it happens. Sheepdog Church Security has a downloadable training packet, Child Protection, to help your church in this area. Remember: “It CAN happen here.”