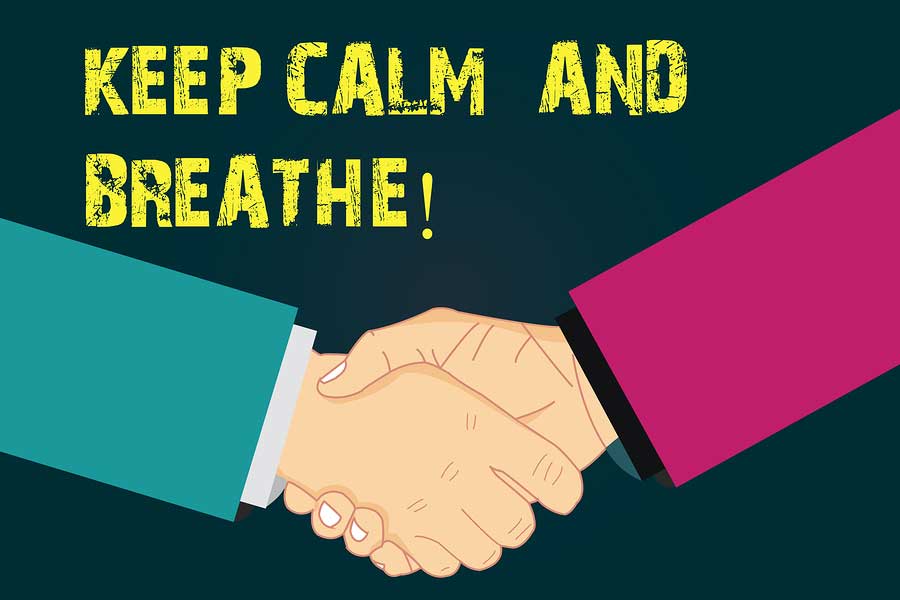 A man without self-control is like a city broken into and left without walls (Proverbs 25:28).

Whoever is slow to anger is better than the mighty, and he who rules his spirit than he who takes a city (Proverbs 16:32).

Know this, my beloved brothers: let every person be quick to hear, slow to speak, slow to anger (James 1:19).

Washington, DC, January 18, 2019 - A group of high school students and a group of Native Americans were verbally assaulted by a radical group. One of the native men mistakenly thought the students were provoking the radicals and approached them while beating on a drum and singing. The student the native approached stood still and calm, smiling at times. The situation ended peacefully. [2]

Cedar Hill, Texas, May 9, 2018 - Teacher remains calm when shoved: A teacher took a student's cell phone away during class, telling the student he would get it back after class. The student became angry, followed the teacher to the front, and shoved him. The teacher let the student take the phone. The student left class, then came back, admitted he was at fault and apologized. [3]

Another article in this series, "With a Word," drew on the first seven of ten points in the Sheepdog Church Security resource "Verbal De-Escalation Checklist." Here are the last three points, which all relate to the issue of control:

Point eight is, "Don't try to come across as the 'tough guy.'" What works on a TV show or in a movie doesn't always work in real life. We are trying to calm tensions, and real calmness is not forced. Coming across as tough often makes matters worse.

The tenth point is, "Respect the subject's dignity." In the first place, there is no point in degrading or humiliating someone who is already down. It is likely to stir up more anger. In the second place, as a ministry, we have an interest in helping disturbed persons after incidents have cooled down, but denial of dignity may close the door to helping them.

Sometimes, when there is a tense situation threatening to become a major disruption, we hear an official say, "We're trying to keep things under control." The concern is that the situation could get out of control with unfortunate consequences.

When we are trying to defuse developing disruption through verbal de-escalation, we intend first to keep it under control, then to stay in control until it comes to a peaceful end. But to do this we need Zone Control, Self Control, and Conversation Control.

In many ways, this is the simplest kind of control. The intent of zone control is to keep the conversation between us and the disturbed person(s) without interruptions, interference, or distraction by making a safe zone. If we can, move the parties to a quiet corner or get the subject to turn away from other people in the area. If the site is next to the entry door, have other safety team members steer people coming in and out around the scene.

This is the hardest and the most critical kind of control. It is the kind taught in the Bible, as in the verses above. This means controlling our actions, controlling our emotions, and controlling our words and body language. Proverbs 25:28 equates self-control with self-defense. Prov. 16:32 says there is real strength in controlling anger. Most of us know persons who have taken or are taking anger management classes. James 1:19 gives us a clue in how to control our anger: be quick to listen and slow to speak, then slow to anger.

Let's see an example from the workplace. A counselor at Duke University who helps disabled students deals with the tension of emotions and discouragement in her clients. She has advice based on her own experience:

It took time to develop this level of self control, and she's working to improve it.

The Bible is also concerned about how we see people, and psychologists say that how we see others shapes our attitudes. Jesus said that someone who calls his brother [or sister] "Raca" (i.e. considers him or her worthless) is in danger of hell (Matt. 5:22). God prescribed the death penalty for murder because "God made man in his own image" (Gen. 9:6). In other words, we are to see the image of God in our fellow human beings, even when this image is tarnished.

The training course names several ways in which self-control is to be exercised in verbal de-escalation. These include body language, facial expressions, and voice [1]. We are not on a stage or movie set where we follow a script, but in real life where tense situations challenge our acting ability and there's no written script or a director's guidance. Our self-control must come from inside, from who we are.

To a certain degree, we as humans can learn some level of self-control, but there is more. Paul tells us in Galatians 5:22-23 that "the fruit of the Spirit is … self-control." As Christians, we are to have the Holy Spirit working in our lives, and the fruit of this includes self-control. Even then, we still have to consciously work on it. Paul admitted he had to learn self-control in some things, such as being content (Phil. 4:11).

The training course covers body language, then goes on with facial expressions and voice, which are good conversation habits even when we are not engaged in verbal de-escalation. Your face should be relaxed. Wear a relaxed smile, not a grimace. Maintain eye contact without staring.

Voice control includes the volume (soft, not loud), rate of speech (slow and even), and tone (friendly and helpful). We should note how we respond to these same factors, putting ourselves in the other person's place.

Other articles in this series concern what causes disruption, how to see the need for verbal de-escalation, approaching the subject(s) and initiating de-escalation, and following through with more help for a subject.