Go to the Mat 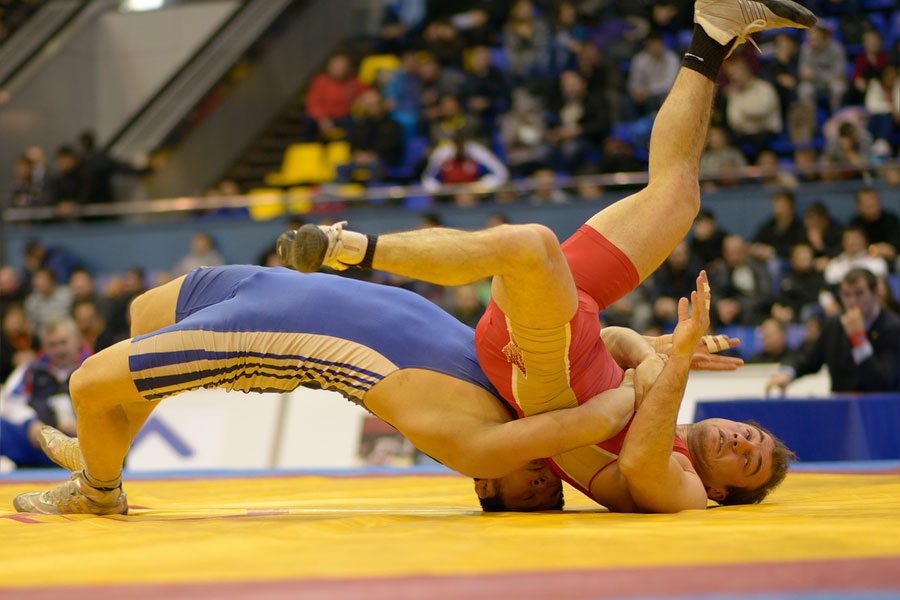 But you, God, will bring them down into the pit of destruction (Psalm 55:23).

For we do not wrestle against flesh and blood, but against ... the spiritual forces of evil ... (Ephesians 6:12).

Going to the mat

"Going to the mat" is originally a wrestling term. The mat is where the match takes place, so it has come to figuratively mean wrestling with issues, meeting one-on-one with someone to debate ideas, work out differences, etc. Even further removed from the sport, it may mean actively entering a political campaign or public issues debate.

During a wrestling match, "Go to the mat" means to take an opponent down, put him on the mat. In wrestling, this is a takedown, holding onto and pulling the other wrestler down. In boxing, this is a knockdown, using impact to floor the opponent. In Judo, the opponent is put down with a throw. In mixed martial arts, any and all of these may be used, along with tackling. All of these moves, whatever the combative sport may be, can be covered by the term takedown.

Paul wrote that in spiritual warfare, our opponents are spiritual forces. These same forces are at work within flesh-and-blood people, the ones against whom we are to guard the flock. In this case, as we wrestle against spiritual forces, we also have to physically deal with human forces. Sometimes, this is literal wrestling, a hand-to-hand struggle.

Takedowns in the News

As reported in 2014, according to an FBI study of active shooters, 13% of active shooter incidents were ended by unarmed citizens, more than three times as many as ended by armed persons. Judging by news accounts of these incidents, most were done by takedowns of one kind or another (1). Here are a few incidents in schools and churches:

Mattoon, Illinois, Wednesday, September 20, 2017 - Responding to reports of shooting, a teacher accompanied the school resource officer to the high school cafeteria. There, they saw a student firing a handgun. The teacher quickly tackled the student, and the SRO took the gun (2)(3)(4).

Noblesville, Indiana, Friday, May 25, 2018 - A student who left class during testing returned with a gun. The teacher distracted the student by throwing a basketball, then rushed and tackled him. The student was only able to fire a few shots, wounding the teacher (5)(6).

Antioch, Tennessee, Sunday, September 24, 2017 - A gunman killed a woman in the parking lot as she left church following the morning service. He then entered the church sanctuary, firing at members as they ran, wounding a few. An usher confronted him, wrestling him for the gun. The gunman ended on the floor, disarmed, after wounding himself in a leg during the melee.

London, England, UK, Sunday, February 13, 2017 - An assailant brandishing a knife at a church was tackled and disarmed by an unarmed security guard.

To many people, a takedown, knockdown, or throw seems like an awfully drastic measure for a church safety team member to use. It sounds like a street fight or saloon brawl in a western, but there are times when one or another of these moves is needed.

To Gain Control- Sometimes a disruptive individual continues to struggle and cannot be effectively controlled with a hold. Then the person needs to be put on the floor or ground to keep them from breaking loose and hurting you or others.

No Time for a Hold - There will be times when we won 't be able to execute a hold, such as when a violent disrupter is quickly running at or by us. Our only chance is to quickly knock or pull the assailant off balance so they fall to the floor.

Immediate Danger - The threat may be so immediate that a knockdown is the wisest move. In the case of an individual with a firearm, it 's "whatever it takes," whether grabbing the hand with the weapon, tripping or tackling the person, or dealing a blow with the hand, the foot, or whatever you may be holding.

To Buy Time - By directly engaging the violently disruptive person, we are keeping them from hurting others until either we gain control or help comes. The latter is true when the disrupter is too strong to control by yourself. Hopefully, you have already notified other team members and they are on the way, or others are watching who can come to your assistance.

As an example of help coming from someone who saw what was happening, a grandmother in Baton Rouge who was a passerby saw a policeman in a life-and-death struggle with a man who had a gun. She called 911, got out of her car, and jumped on the back of the gunman (8).

To begin with, when it comes to self-defense, we do not have to precisely follow the rules of one sport or another. There 's more at stake than whose hand the referee raises after the bell rings. The five most common takedown methods are grapple, tackle, trip, knockdown, and throw. These five categories encompass the nine wrestling takedowns outlined in a Wikipedia article (9) as well as a few more.

This is the typical wrestling takedown category. Wresting is also known as grappling - the contestants grab each other in an attempt to gain and maintain control. With evenly-matched skilled wrestlers, there may be several reversals before one dominates. If the match is not decided by a pin, it is determined by points awarded by the referee during the contest.

Self-defense courses teach several grappling takedowns, each with variations. Most of these involve grabbing the attacker 's leg with your hand/arm, with your leg, or with both. Scores of YouTube videos demonstrate these. However, half or more are demo ads that hide part of the view with a solicitation of buying the course, or show only part of the move.

One piece of advice is to concentrate on a few moves that suit you best and practice until you master them.

Tackling is usually associated with American football. However, some wrestling takedowns are tackles, and this method is used in other combative sports. Basically, tackling is throwing one 's self at the torso or legs of the opponent, using your weight and momentum to throw him off balance and bring him down with you on top. Using a well-placed tackle from the right direction, a small person can down a larger aggressor. Yes, it does work that way in football.

An assailant who is rushing can be easily tripped with a foot, leg, or object, even a hand. Tripped attackers usually cannot control their fall, and practiced defenders can gain control of the fallen offender with a hold. Tripping is commonly taught as a self-defense move, especially to smaller people. The beauty of this method is that it takes advantage of an assailant 's own weight and momentum. A child can trip a rushing giant. 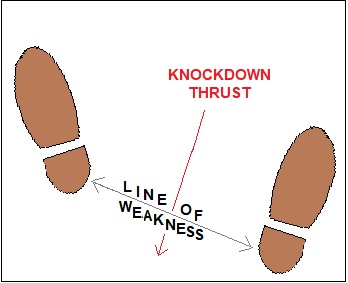 Many of us have seen televised boxing matches where scored knockdowns determined the winner when there was no knockout. But we don 't need heavy gloves to score a knockdown in self defense. And it is not always an uppercut to the jaw.

The simplest knockdown is a quick shove across an attacker 's Line of Weakness (the line from one heel to the other), especially pushing backwards. The direction of thrust should be along our "Line of Stance Integrity" (10), not across it. By the way, the knockdown thrust is more effective when pushing the offender backwards, since it is away from the toes.

Throws were popularized with the introduction of Judo - so much so that high school students were practicing them on each other, even without proper instruction. There was fascination with the idea that a defender could take advantage of the momentum of an attacker, sending him flying over one 's back or shoulder.

The popularity of throws continued with the growth of professional wrestling. However, here it was mostly stunts for show.

Back to Judo: Throws have a legitimate place in self defense. Not every defensive encounter includes a throw. In training, the student learns to know when it is the best move and when it is not. You do not just grab opponents and throw them. A throw is most effective when it is a conversion of momentum. All you do is change the direction of the attacker 's motion.

Executing a throw, you grab an assailant 's arm, and turn so that he goes over your shoulder or back to land on the ground or floor. One caution is that with a poorly executed throw, you could also throw your back or shoulder. Ouch!!

Most church safety team members will never have to use self-defense measures, such as holds and takedowns, while guarding the flock. For most disturbed persons, verbal de-escalation followed by pastoral and/or professional counseling should be sufficient. Learning and practicing unarmed self defense will equip us just in case it is needed. If not in church or at church events, we may need to defend ourselves in other places, such as on the street. In any case, we need to be situationally aware (11) and know how to conduct and position ourselves (12).

- Protecting Yourself and the Church with Use of Force Laws [https://sheepdog-church-security.thinkific.com/courses/protecting-yourself-and-the-church-with-use-of-force-laws]

Sheepdog Church Security Roll Call [https://soundcloud.com/churchsecurityrollcall]. At the end of the podcast you learn how to get this month 's special resource.