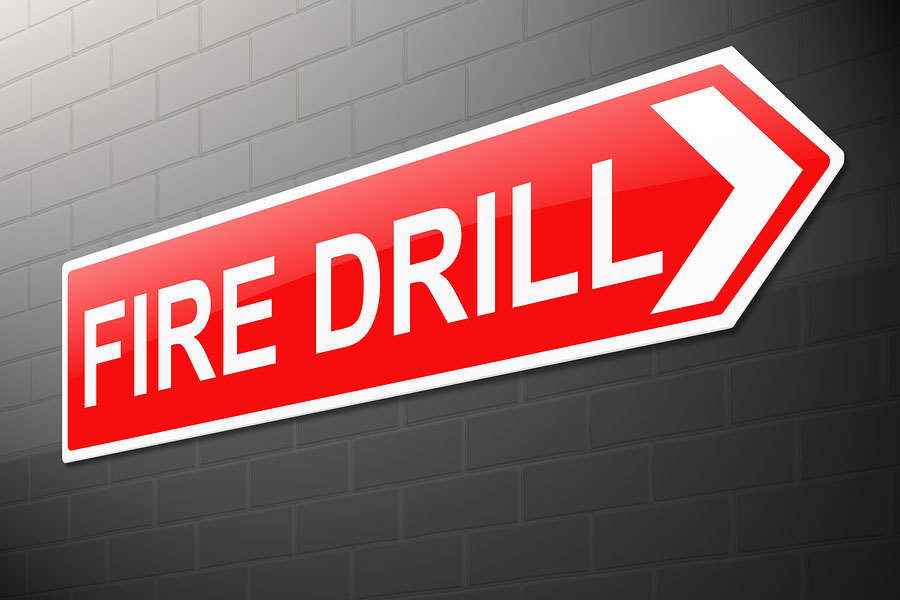 As a member of the Church Safety Team, are you prepared to respond if a fire broke out in your church while you are on duty? Smooth evacuations of burning buildings do not just happen. Most church fires begin when no one is there, or only a few people, but sometimes they start when there is a packed house. Your safety team should have a plan in place and prepare your congregation through practicing fire drills.

[Fire out of control] “If fire breaks out and catches in thorns so that the stacked grain or the standing grain or the field is consumed, he who started the fire shall make full restitution (Exodus 22:6).

[Rescue] Save others by snatching them out of the fire (Jude 1:23).

[Withholding fuel] For lack of wood the fire goes out (Proverbs 26:20).

Costești, Romania, April 1930 - The small wood church in Costești [KOS·tetch·yĭ], built in the 1700s, was crowded with children, their leaders, and some elders for the Orthodox Good Friday service, while their parents listened from outside. A candle ignited the braid hanging from a wreath. That was put out, but wreaths in the attic had also been ignited without anyone noticing.

Fire expanded rapidly, and the roof collapsed. The door was too narrow, and it was locked. 118 people, mostly children, died. [3]

Cambridge, Maryland, September 11, 2018 - A person or persons unknown set a fire in the doorway of a church. A neighbor spotted the fire early in the morning, and called a church member. Members came, and extinguished the fire before firefighters arrived. [4][5]

Berkeley, California, April 12, 2018 - Berkeley firefighters put out a fire in debris piled against the front door of a church. Several neighbors saw the fire burning or being set and called 911. The suspect was soon arrested by Berkeley police. [6]

Hempfield, Pennsylvania, Thursday, March 29, 2018 - Holy Thursday Mass was interrupted when a trash can in a side room caught fire. By the time firefighters came, members had put the blaze out with a fire extinguisher. [7]

If Fire Breaks Out...

As a member of the Church Safety Team, you are on duty during the morning worship service. Patrolling a corridor, you smell smoke. It's coming from a vacant classroom - the kids are down the hall in the Youth Chapel for Children's Church. Looking in you see a paper decoration leaning against a table lamp smoldering. Suddenly, it bursts into flame. What do you do?

It is important to know what to do if and when a fire starts in the church.

Lessons from the News Stories

Costești - This is a sad story of what should not be done.

Cambridge and Hempfield - Members who were present immediately put out the fires. How they did it in Cambridge was not stated (the members were outside), but in Hempfield a fire extinguisher was used.

Berkeley - Neighbors saw the fire being set and called 911 (a neighbor also responded in Cambridge). These churches had a community relationship which led to watchful neighbors.

The Sheepdog Church Security training course "Arson Prevention and Fire Drills for Churches" has this advice: "If there is a fire in the church, respond by using the acronym RACE: Rescue, Alert others, Confine the fire, Evacuate and/or Extinguish (Kiurski, 2008)." [8]

This is not the same Rescue as in the types of evacuations (removing people from an environment following an emergency). This Rescue is removing people from the immediate vicinity of the fire. For example, getting everyone out of the kitchen if there is a range fire. It puts a premium on their safety.

This is where pulling the fire alarm (direct line to the fire department) or calling 911 comes in. For a Church Safety Team in an occupied building, this includes notifying the rest of the team with a "Code Red" call.

This is to hinder the spread of the fire. Close all windows, vents, and doors. It gives others in the building more time to evacuate.

Whether to evacuate could be a judgment call. This depends on if the congregation is in any danger, including smoke. If a small fire is in an area remote from where the people are and it can be quickly extinguished, go ahead and put it out, using a fire extinguisher (see below).

People in the immediate area of the fire should have already moved out. Now move everyone out of the building to the assigned assembly area. Check fire doors and room doors as you go for heat and leaking smoke. Close doors behind you as you go.

One or more Safety Team members should follow the crowd out. Check for people left behind and those who cannot go on their own, such as disabled, ill, and injured persons.

Extinguishers also must be within certain distances - a "maximum travel distance" - of potential use, depending on the type of extinguisher:

The training course has instructions for how to use an extinguisher. [1][2]

Smooth evacuations of burning buildings do not just happen. The fire in Costești is a case in point. Most church fires begin when no one is there, or only a few people, but sometimes they start when there is a packed house. If people are in several rooms, as they are during Sunday/Sabbath School, this complicates evacuation.

In any case, evacuations have to be planned. Ask local fire officials to advise you in planning evacuations.

Things to plan for an evacuation:

Once we have planned evacuations, we practice. Having already made our evacuation plans, the Safety Team and the church staff (those leading the evacuation) drill. Then they conduct a fire drill during a service time, so as many people as possible learn how to get out in case of fire. Have other drills during Sunday School and during mid-week activities. If the church has a pre-school or a school, these also need to have fire drills.

During a drill, also practice assisting persons unable to keep up or to get out on their own. The SDCS training course has information on this in the sections "Purchase Equipment", "Evacuating Children", and "Planning for Evacuations of the Disabled and Elderly" [1][2].

After a drill, evaluate how it went. Were there any problems? Having fire department officers observe the drill helps in the evaluation.