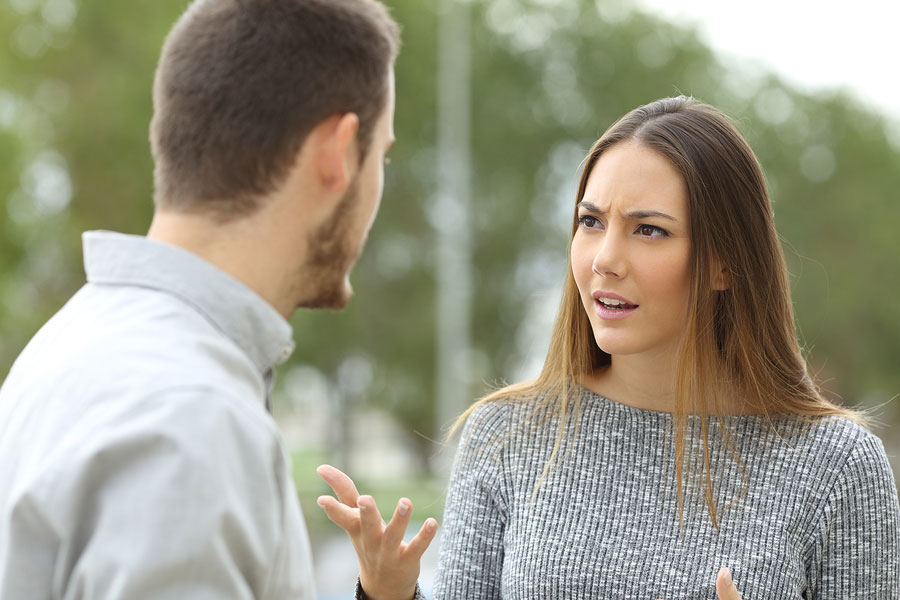 “Say to the congregation, Get away from the dwelling of Korah, Dathan, and Abiram” (Numbers 16:24).

“Behold, I am sending you out as sheep in the midst of wolves, so be wise as serpents and innocent as doves” (Matthew 10:16).

Stand therefore, having fastened on the belt of truth, and having put on the breastplate of righteousness (Ephesians 6:14).

A common expression in American English is, "I wouldn't touch them [or "it"] with a ten-foot pole." This implies that it is not wise to get too close to some people or situations, that it is safer to keep your distance. This is the kind of thinking behind Duty to Retreat laws - "Back off if you can."

As safety team members responsible for the safety of other people, we cannot responsibly back away from every potentially dangerous situation. There are times when we must be involved with a disruptive person, but there are ways of increasing our safety while doing so, such as how we stand and how close we get.

A Case of Too Close

As well-trained as FBI agents are, they can slip up and get hurt needlessly. One such case was in Orlando, Florida in 2012. A number of law enforcement officers from two states and the FBI confronted a suspect in the kitchen of his residence. Even though he was in an interview stance, the suspect was able to grab a knife and wound the agent seriously. The FBI agent should have been more cautious, but he stood too close:

Abner and Joab were on opposite sides in Israel's civil war. Now it had ended, and it was time of peace. However, Joab still carried a grudge against Abner, who had killed Joab's brother in self defense during a battle. Abner, believing Joab had peaceful intent, was not on his guard when Joab asked him to come with him to the city's gate. There, Joab pulled out his dagger and killed him.

For us the point is that we should not let our guard down when encountering a potentially disruptive person and come in so close that we do not have the time or the room to defend ourselves.

The incident from 2012 points out the fact that firearms are not the only threat of deadly force from an individual inclined to violence. These include edged weapons (such as knives, swords, machetes, razor blades, and box cutters), puncture weapons (such as a meat fork, screwdriver, awl, stake, etc.), clubbing devices (brick, stone, bat), or (in some cases) an assailant's hands and feet.

When we prepare to defend against a sudden, violent outburst, we prepare for any and all of these. Our second line of defense, after situational awareness, is where and how we move and stand. It is up to us to avoid being in the wrong place in the wrong way at the wrong time while still guarding the flock. To do this, we need to know reactionary distances and defensive stances.

Reactionary distance - the distance you need to keep for safety - is determined by the "reactionary gap" for that situation. According to Dave Grossi, 'Reactionary gaps' are defined as 'the minimum amount of space needed to ensure that you can properly react to whatever threat may be presented by a suspect being questioned or detained.' (3) This is defined by the weapon (seen, known, or suspected) and the size, strength, and skill of the subject. For instance, since the suspect in Orlando was skilled in Mixed Martial Arts and could move at lightning speed (which was already known), more distance was needed to give an officer time to react. And being in a kitchen made potential weapons readily available, so it would have been safer to have had the suspect move away from the kitchen counter.

Research testing shows that it takes 1½ to 1¾ seconds for an average person to cover a distance of 21 feet from a standstill. Some persons can cover this distance more quickly (4).

Take into account the time to react. For the average person with a snapped holster, it takes about that long or longer to draw a handgun. However, with training in unarmed self-defense, the defender may be able to dodge a thrust or swipe, then disable the attacker. By remaining alert and aware, we can see the attack begin and respond in time to defend effectively.

The same is true for an impact weapon. The difference is the means of inflicting harm. A person skilled in unarmed self-defense can dodge or deflect the blow and disable the assailant. But in any case, enough distance is needed to allow time to respond.

For an unarmed subject, six feet is usually the minimum distance to have enough time to respond. This is not quite as long as the proverbial 10-foot pole, but it is longer than arm's length.

How we stand when close to the person we are dealing with is also important.

In the first place, as in verbal de-escalation (5), we do not wish to agitate the subject further by invading their personal space. The more agitated they become, the wider this space grows. At the same time, we want to be close enough to hear the other person clearly, and they can hear us talking in a normal voice.

In the second place, we need enough room to move and time to react if the subject makes an aggressive move.

Use the "interview stance" that police use for talking to a suspect. You stand with your feet a shoulder width apart, at a 45° angle to the subject. If you are armed, keep your weapon side away from the subject.

What are the advantages of this stance?

First, this is less threatening. Since you are not facing the other person directly, you are not as likely to be seen as aggressive. We want to keep things calm if we can.

Second, you are close enough to converse with the other person without raising your voice. For one thing, this helps to deescalate the situation. For another thing, you may avoid attracting the attention of others in the area. It helps to keep matters as confidential as possible.

Third, this leaves a little more distance between your preferred hand and the other person, giving you a split second more to respond. And if the person moves forward aggressively, you may be able to move in behind him quickly.

While protecting others, we need to always be in a position to defend ourselves as well as others. To do this, we

"Protecting Yourself and the Church with Use of Force Laws" [https://sheepdog-church-security.thinkific.com/courses/protecting-yourself-and-the-church-with-use-of-force-laws]

This course is designed to help you understand what use of force laws are intended to allow, how they can play a role in safeguarding your flock, and their limitations. It also explains the legal responsibilities that apply to your Church Safety Team members, and explains how to limit your criminal and civil liability in situations where force is used.

Our Church Safety/Security Volunteer Academy includes essential information and training tools to help you develop a robust Church Safety Team and then train them to ensure your congregation enjoys protection at all times.

All 7 of our Training Courses

Listen to the podcast for this article at https://soundcloud.com/churchsecurityrollcall. At the end of the podcast is the link to this month's special resource.