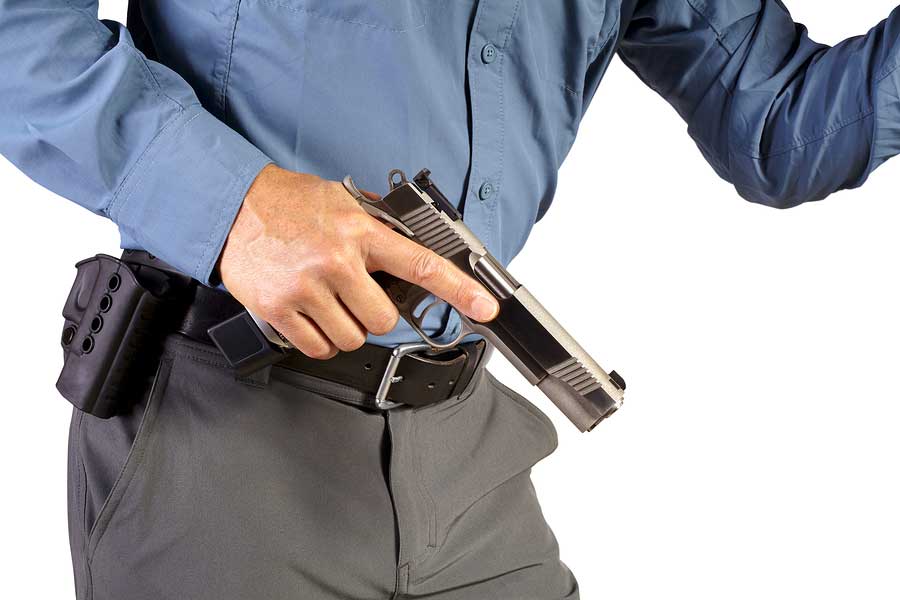 The Bible describes and refers to physical force using no weapons, less-than-lethal weapons, and deadly weapons in warfare and defense.

Hands only - And behold, a young lion came toward [Samson] roaring ... and although he had nothing in his hand, he tore the lion in pieces as one tears a young goat. (Judges 14:5-6)

Just a staff - Benaiah went down to him with a staff and snatched the spear out of the Egyptian's hand and killed him with his own spear. (1 Chronicles 11:23b)

Edged weapon - And Ehud reached with his left hand, took the sword from his right thigh, and thrust it into his belly. (Judges 3:21)

Projectile weapons - AThey were bowmen and could shoot arrows and sling stones with either the right or the left hand; they were Benjaminites, Saul's kinsmen. (1 Chronicles 12:2)

This question might seem too obvious, but contains a hidden distinction, depending on what we mean by "armed." Some people assume that "armed" means having lethal weapons, such as knives, archery, or firearms. But others recognize that a defender can be armed with a weapon that is less-than-lethal or essentially non-lethal. There are really three levels of force in this question: No Weapons, Less-than-Lethal Weapons, and Lethal Weapons.

Another article in this series - "The Five Colors of Force" - identifies "Empty-Handed Control" as the middle level on the Use of Force Continuum. Ideally, we can use holds and takedowns to control a situation and restore order. However, there may be times when these are not enough. For instance, if we are facing a violent person who may or may not be armed, and we have no weapon or device (or no opportunity to pull it out), we are left with our hands and feet to defend ourselves and others.

Samson killed an attacking lion with only his hands, but he had extraordinary strength from the Holy Spirit which came just when he needed it (Judges 14:5-6). We do not have this kind of strength, but we can learn how to use our hands and feet. For instance, a bull wrestler can bring down a ¾-ton muscular animal. We can learn to control persons much bigger than ourselves.

Martial arts were developed for self defense. Most of us know of Judo, Jujutsu, Karate, and Tae-Kwan-Do, and many of us are trained in one or more of these. Some of us may also have been boxers or wrestlers. As useful as boxing or wrestling may be, learning a martial art will better prepare us for defense and control. At least we can use moves not allowed in the ring.

One martial art not as well known is Krav Maga. It was developed by the Israeli Defense Force, and is now taught to military and law enforcement personnel around the world. The goal is to end a threat as quickly as possible. This is Kris Moloney-s favorite martial art. However, in church safety ministry work, more discretion is required, because this has the potential of being deadly or seriously injurious. The advantage it has is in defending against deadly force when all you can use is your own body.

If you or others on your Safety Team have not done so yet, get self-defense training as a group. Have the instructor focus on the skills most needed in a church safety ministry.

Throughout history, there have been many less-than-lethal weapons. In ancient times, a traveler usually had a staff. This was a walking stick, needed because of the uneven surfaces - paved roads were rare back then. Besides steadying a walker, the staff also served as a defensive weapon, and some individuals, such as Benaiah (1 Chronicles 11:23), were especially skilled with it. Though normally less-than-lethal, a staff was potentially deadly.

Also used as weapons were rods, normally used as guides or prods for oxen. Shamgar used an ox goad to defeat 600 Philistines armed with iron swords (Judges 3:31). The modern equivalent of the rod is the baton. Actually, many objects can be used as impromptu defensive weapons, whatever can be swung, thrust, or thrown.

Today we have items which have been designed as non-lethal weapons. They are now classified as less-than-lethal, since there is the potential for great bodily harm or death, however little that risk may be.

Besides the baton, less-than-lethal weapons used by law enforcement include irritant sprays, tear gas, rubber bullets, and electric discharge devices (EDDs). Professional security does not use rubber bullets, but does use the others. One new weapon is an entanglement device.

The most common irritant spray is pepper spray. This is an aerosol containing oleoresin capsicum (OC), the "hot" substance in hot peppers. OC spays have proved effective in close quarters to fend off attackers. OC spray does not have the range of projected wire contact EDDs, but is less expensive, has more shots, and has a more lingering effect.

There are two basic kinds of EDDs: direct contact and propelled wire contact. Both are called "stun guns," but the propelled contact device is commonly known as a Taser, the trade name of the original and leading brand.

When contact is made with a suspect, capacitors release a stored electric charge which goes from one contact to the other through the subject-s body tissues. This gives a jolt to the nerves, and can literally knock some persons off their feet.

A direct contact stun gun has to be held to the body, so you have to be within arm-s length. The advantage of the direct contact device is that it can be repeatedly discharged as long as the capacitors and batteries are charged and contact is maintained. The batteries can be recharged, and it-s ready to go.

The advantage of the propelled wire device is the increased effective distance, which is equal to the length of the wires. The disadvantage is that repeat charges are limited to the number of cartridges. Also, it has to be re-loaded with new cartridges, an additional expense.

A modern version of an old less-than-lethal weapon has recently become available to law enforcement officers. For more than a thousand years, hunters and herders in South America have been using bolas to catch game and restrain livestock. For livestock use, it serves the same purpose as the lariat (aka lasso), which originated in Egypt and was imported from Spain.

The bola is three cords fastened (interwoven or tied) at one end with weights (like balls) at the loose ends. The user throws it at the legs of the animal (or person). The balls swing around the legs, pulling the cords tight. Holding it by one of the balls while swinging doubles the length of the cord being swung, greatly increasing the velocity and range.

The new weapon -trade name BolaWrap 100 by Wrap Technologies - looks somewhat like a Taser. It shoots out, weights first, an 8-foot line weighted at each end. When this line hits the subject, it wraps around, binding whatever area is hit -legs or arms. A new cartridge can be inserted in seconds. It was designed for restraining mentally ill and non-compliant persons without inducing pain.

A strange phenomenon in some states is that it is legal to carry a firearm, but irritant sprays or electric discharge devices have more restrictions. Several more states had bans or severe restrictions on pepper spray and stun guns in 2008 and 2009 when Eugene Volokh wrote a book and several academic papers for law schools advocating for the legalization of nonlethal weapons as also being covered by the Second Amendment along with lethal weapons:

The First Amendment presumptively protects the right to associate, to spend money, and to use technological devices (such as telephones, amplifiers, and the like) to make one-s expression effective. Likewise, the right to defend life should protect the right to use nonlethal devices that help effectively defend life. [2]

Nevertheless, it is wise to check not only your state-s laws on pepper spray and stun guns/Tasers, but also your local jurisdiction-s regulations where you live and where your church is.

This is class of weapons most people think of when you say, "weapon." This is the most readily lethal form of deadly force. This category includes edged weapons, such as swords and daggers, which are close-contact weapons, but the most common lethal weapons today are firearms. For one thing, small ones are easily hidden. For another, they are effective at a distance many times the length of one-s arm.

Let-s take a biblical example of the relative effectiveness of small weapons operating at a distance. In 1 Samuel 17, David was a teen whose primary work experience was herding sheep and being a court musician. He volunteered to go one-on-one with a giant who-d been a soldier for all his adult life. The giant wore heavy armor, had a large shield, a massive spear, and a huge sword.

What did David have? A sling. His ammo was smooth stones from a creek bed. Like a firearm, the sling was a projectile weapon. The sling was David-s gun, the stone was his bullet, his aim was accurate, and he fatally shot the giant in the head.

With the power of a firearm comes responsibility. The role of federal, state, and local laws concerning the possession and use of firearms is to promote responsibility and require accountability.

Where many churches and church members have wanted to draw a line is firearms. They see a disconnect between church safety and carrying these instruments of death. It is easy to understand their concern. However, there may be situations when someone with a firearm makes the difference between a few or no victims of an attack and a massacre. This was seen in 2017 when some attackers were stopped by armed citizens, but another attacker wasn-t confronted until he-d killed half the congregation.

Firearms need maintenance - regular cleaning. Also, a firearms user has to practice shooting to keep their accuracy sharp. For security use in a populated area (such as a church), the user needs training and practice in knowing when, where, and how to shoot to avoid hitting persons other than the attacker.

As with other weapons, be sure you know and comply with federal, state, and local laws. Also, do your best to keep situations from escalating to the point of requiring the use of lethal force. One skill to learn for this is verbal de-escalation [3].

Other topics in this series cover general issues in use of force, citizen-s arrest, the law, the Use of Force Continuum, and what happens when force is used.